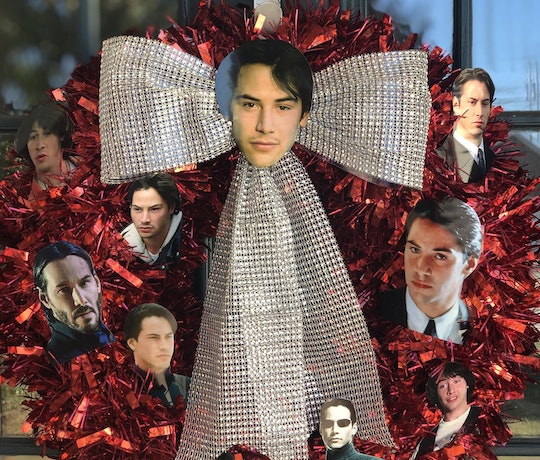 BRB, Buying All The Keanu Wreaths I Can Find

If there's one thing universally agreed upon, it's that Keanu Reeves is a perfect specimen of humanity. He's handsome, kind, and oh yeah, he's John Wick. But he also has a name just asking for puns, so thank the gods of homemade fandoms for all the Keanu wreaths available to celebrate the holidays.

I know what you're thinking: why on earth did no one think to put Keanu on a Christmas wreath before now? Reader, I will tell you that I do not know. I am only grateful for those solemn craftspeople who decided to eschew their normal fascination with terrifying random passersby using the likeness of Nicholas Cage, in favor of our very own Keanu Wreaths. I mean Reeves. Johnny Utah. Neo. Whatever.

I first started crushing on Mr. Reeves as a very small girl in small town Ohio, watching Babes in Toyland on TBS. In the '90s I found that it always aired immediately before National Lampoon's Christmas Vacation — another of my favorites. So, indolent child that I was, I would settle in my Strawberry Shortcake nightgown, open a box of Raisin Bran (in lieu of popcorn), and indulge in a marathon of television while my siblings were probably doing something active. If only I had known about Keanu wreaths then. Now what a merry Christmas I can have.