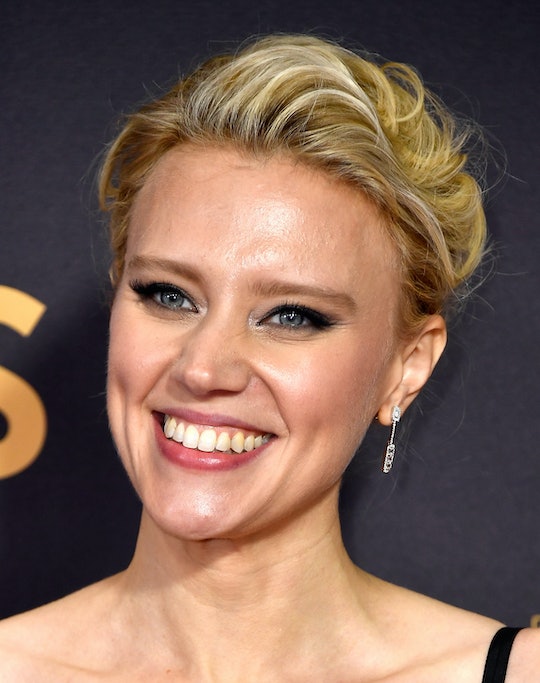 Saturday Night Live has never shied away from doing political humor, but things went to the next level when Kate McKinnon started doing impressions. The Kellyanne Conway It parody on Saturday Night Live was perhaps the most accurate impression of her that McKinnon has done yet. And that is definitely saying something.

Kellyanne Conway hasn't been quite as visible over the past few months as she was at the beginning of Trump's presidency, when she was one of the president's top advisors, and appeared to be always whispering in his ear. Since she hasn't been around as much, tragically this meant that McKinnon's spot on impression of her has been missing from Saturday Night Live skits. Luckily (or unluckily), Conway has been speaking out a little bit more in the past few weeks in the wake of more and more Trump-sized blunders. This gave the sketch show the perfect opportunity to break out McKinnon's Conway impression, which they did in the creepiest, most hilarious way possible — by making Conway the clown character from the movie It. In the skit, Conway lures people into the sewer, including Rachel Madow and Hilary Rodham Clinton herself. Is it too much if I say that this might not be that far from reality?

The skit showed Anderson Cooper leaving the CNN building after a long day, and losing a piece of paper in the windy and rainy streets of New York City. That's when Conway appears, peering out of a gutter, trying to get Cooper to put her back on TV. When Cooper asks what she did with her makeup, McKinnon's Conway says that she "toned it down," before asking Cooper to get her back on the small screen. "Don't you want a quote?" she asks in her creepy clown voice. "I'll give you quote. I'll give you craaaazy quote." As inducement, McKinnon suggests "OK so Puerto Rico actually was worse before Hurricane Maria and the hurricane actually blew some of the buildings back together and I don't know why Elizabeth Warren won't tweet about that." (It should be noted here that this is not an actual Kellyanne Conway quote.)

The skit's Anderson Cooper doesn't fall for it, especially when a nearby worker warns him not to talk to her. She'd been luring people into that sewer for weeks. Rachel Madow showed up, and then Hilary Clinton, who is McKinnon's other best impression ever. "It's me, I'm down in the sewer," she said. "Where did you think I'd be? Michigan or Wisconsin?" In the end, it is Clinton that lures poor Anderson into the sewer. Cooper wakes up realizing the whole thing was just a nightmare, until Kellyanne Conway appears at the desk, where she hasn't been seen in forever.

This skit is just in time for Halloween in a couple of weeks, as the return of Kellyanne Conway and the potential re-election of Donald Trump (a future newspaper headline Conway uses to scare Cooper in the skit) are probably some of the scariest things facing Americans at this moment. Honestly, who needs horror movies when you can watch the horror show that is the news. The scariest part about this, of course, is that it is actually real life and it is actually happening. I refuse to believe that Trump could be elected to a second term, but if he is, then at least we'll have McKinnon to make it slightly more bearable with her spot-on skits.