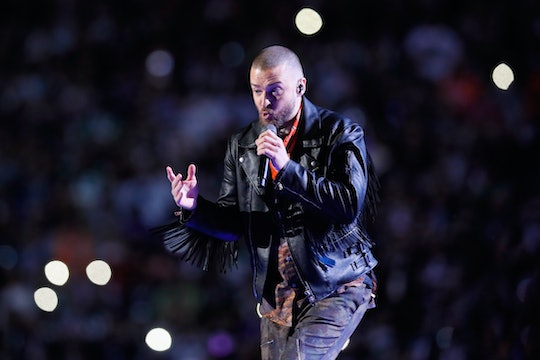 A lot happened during Timberlake's performance in Minneapolis. There was singing, dancing, a not a hologram, but a "projection" of Prince, and so much more. But perhaps the most iconic moment of the night came towards the end of his show, when Timberlake entered into the stadium's crowd to finish his song medley. And while many fans were able to get right next to Timberlake and enjoy his presence, one kid decided that he couldn't let the opportunity pass him by without at least trying for a selfie.

Of course, the identity of this kid is still unknown (but don't worry, with the internet, I'm sure the world will know who he is in a few hours), but his actions are still already the the stuff of legends. I mean, while basically everyone around him was just jamming out with Timberlake, this kid was seriously stressing about getting that selfie, and that dedication definitely served him well.

Update: As of 8:41 p.m. CST, the identity of "selfie kid" has been revealed as 13-year-old Ryan McKenna of Hingham, Massachusetts, as reported by the Twin Cities Pioneer Press.

Seriously, Everyone Wanted To Be Him

Of course, while no one knows who the kid was, he was definitely pretty young, which lead many Twitter users to the same (understandable) hilarious conclusion.

Listen, I know that younger generations might not be aware of who *NYSYNC was and I can take that. But what I can't take is that someone might not know who Justin Timberlake is, especially when you're going to be at the Super Bowl where he's performing. I mean, if I were there, I would have already known what hotel Timberlake was staying in and if he needed any last-minute backup dancers. But whatever, if the kid didn't know who Timberlake was before, he definitely does now.

Really, though, the internet collectively wondered one thing:

Who The Heck Is The Kid Who Got A Selfie With Justin Timberlake?

While it remained unclear just who that kid was for quite some time, one thing was for certain. He, or someone he knows, has been to Sunday River, Maine. As can be seen in all the footage of the young boy getting a picture with Timberlake, he was wearing a hoodie emblazoned with "Sunday River Maine" on it, and Sunday River has even confirmed it.

But despite his direct representation of Sunday River, Maine, the kid lucky enough to be hanging out with Justin Timberlake remained on the down low for a while after halftime before interviewing with the local paper. And now, he reportedly already has a scheduled appearance on Good Morning America.

But, just because he has a cell phone and knows how to take a selfie doesn't mean he has any social media accounts. After all, selfie kid looks pretty young, and he might not be allowed to be online.

For now, it seems as though selfie kid is staying on the down low, which is understandable considering he's probably just enjoying the game for now. But still, people are really curious about him.

Seriously, the kid who was able to snap a selfie with Justin Timberlake definitely stole the show, and people all over, fans from both teams, were obsessed with him.

So, while the world wonders in awe just who selfie kid is, and how he got that picture with Timberlake, it seems as though he's going to take his sweet time basking in internet fame and enjoying the game.