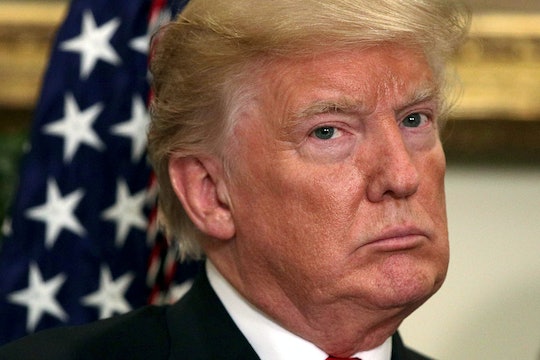 Amid the near-collapse of the Republican effort to dismantle the Affordable Care Act (ACA) and criticism that President Donald Trump is uninformed on the subject, the president addressed the nation Monday. But as Trump urged the Senate to come together to take action to overhaul the country's health care system, another parallel storyline emerged: People are absolutely obsessed with the kids standing behind Trump at his health care speech. Yes, the president was speaking on a subject that's nothing short of cataclysmic, but the unsmiling faces — mostly belonging to morose-looking children — lined up behind him nevertheless caught the internet's eye and its unstoppable imagination.

After two failed Republican attempts to come up with a health care plan at least 50 senators could agree on, Senate Majority Leader Mitch McConnell now wants senators to vote on a bill that largely shrouded in secrecy. And Trump himself appeared live to make the hard sell, claiming that the ACA is "death" and has left a trail of "forgotten victims," according to The Washington Post. In fact, the nonpartisan Congressional Budget Office projected that the most recent version of the GOP Senate bill would have left 22 million more people without health insurance and sent premiums for many soaring.

So, Trump is not the most reliable narrator when it comes to health care issues. He even launched into his appeal to the Senate by claiming that the ACA has "wreaked havoc on the lives of innocent, hard-working Americans," for a whopping 17 years. In reality, President Barack Obama succeeded in passing the signature law in 2010, seven years ago. Naturally, attention shifted to the curious cast of characters assembled behind Trump as he made each of his claims about the ACA.

They were mostly young people who looked entirely unenthused to be there.

Like maybe they really didn't want to be there:

In any case, the racial makeup was decidedly... homogeneous:

And they were all there while Trump said things about health care that weren't exactly true:

There wasn't much sympathy for them, though:

The adults crammed in behind Trump got some attention, too. There was a guy who looked suspiciously like another Republican leader with big dreams of repealing and replacing the ACA:

But the real star of the show was standing next to the impostor Paul Ryan. She was the women with what Twitter said were very obviously drawn-on eyebrows.

It's important to note here that attacking a woman for her appearance is exact what Trump is known for, and doesn't make someone's argument any better.

The whole situation left everyone feeling a little... overwhelmed.

If all goes according to plan, the country will find out Tuesday whether the Senate approves of starting debate on the legislation. By then, the kids (and adults) of the Trump press conference will have been long forgotten. But, today, they are stars.