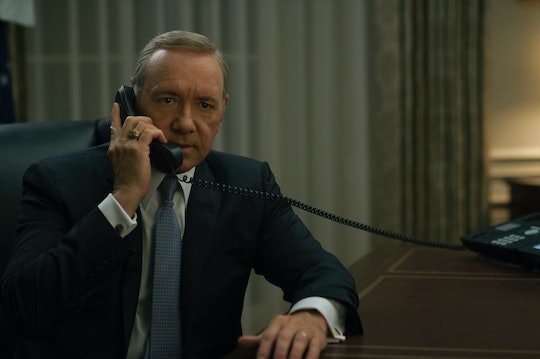 Eerily predictive of our real life election cycle's Ku Klux Klan scandal — (Spoilers for Season 4 of House of Cards ahead.) — Frank Underwood experiences his own KKK bombshell on House of Cards during his primary run in Season 4. Desperately vying for reelection — in spite of never having been elected president in the first place and a dismal approval rating — Frank's campaign gets crushed by an old photo of his father shaking hands with a member of the KKK wearing full hood and robe. The photo has then been blown up and plastered over a billboard in Frank's home state of South Carolina just as primary day is upon them. To sum it up, this is not a good time for Underwood 2016.

Of course, as a Democrat, Frank needs the black vote in South Carolina to help clinch the state in the primaries, so this is horrifying press for the candidate in a southern state. His opponent Heather Dunbar condemns the stunt — admitting that the photo is "troubling" — but surprisingly doesn't blame Frank for the actions of his father.

As far as Frank knows, there is only one copy of that photo, and it's in a lockbox at the bank in his hometown. Meechum confirms that the photo is still at the bank, so Frank and Doug begin to worry the sabotage stems from inside the White House. It turns out that Oren Chase, an old congressional foe from Season 1, is the one who orchestrated the billboard with a photo he claims to have received from a good-looking brunette. He makes a public statement of apology, and suspicion is effectively cast on the Dunbar campaign as the source of the leak.

Struggling to come back from the photo's scandal, Frank loses the support of Texas Congresswoman Doris Jones and her daughter, so he scrambles to find another ally who can vouch for him. He lands on a prominent South Carolina reverend whose church he just spoke at. Frank works his Underwood Magic and manages to secure the church as a location to explain the photo to the press in a face-to-face plea with the nation and, more importantly, South Carolina voters.

In the appearance, Frank explains that while the photo is real, his father wasn't really in the Klan. Instead, he was in need of a $5,000 loan, or the bank was going to foreclose on his family's peach farm. According to Frank's story, the owner of Gaffney First Bank was a member of the KKK and would do anything they told him to do. So, Frank's father attended a Klan meeting and pleaded with the chapter head to persuade the bank's owner to give him a loan. Frank asks the parishioners to empathize with his family's predicament, and implores them to see the billboard as a divisive tactic used by his opponents.

Unfortunately for Frank, right after he gives his statement, a photo of him shaking hands with a Civil War reenactor (an event you may recall from ye olde Frank-pissing-on-his-father's-grave episode) gets leaked. Needless to say, Frank loses his home state of South Carolina in the primaries — an embarrassment for any candidate. Again, this is not a good time for Underwood 2016.

So why would the First Lady sabotage her own husband's primary run in his home state in such a damning manner? Well, for starters, Frank tanked her congressional run and her career as U.N. Ambassador. His approval ratings are lower than her ratings, he needs her support to win, and — now that he's saddled with the burden of losing his home state and appearing racist — he is going to need a strong running mate to bail him out. Claire's suggestion for Vice President? Herself, of course, because she is a beautiful, evil genius. Frank quickly rejects Claire's suggestion, but Claire forces Frank's hand because it's would be incredibly simple for her to jet off to Texas to pursue whatever other office she can try to hold there, robbing Frank of her support on the campaign trail and sabotaging his campaign.

Welcome to the era of Underwood/Underwood 2016.

More Like This
Meena Harris’ New Children’s Book Tells ‘The Truth About Mrs. Claus’
20 Heartwarming Episodes To Help Prepare Your Child For A New Sibling
All The Nights The Grinch Airs On TV In 2022
Disney Introduced Its First Openly Gay Teen Character In Strange World