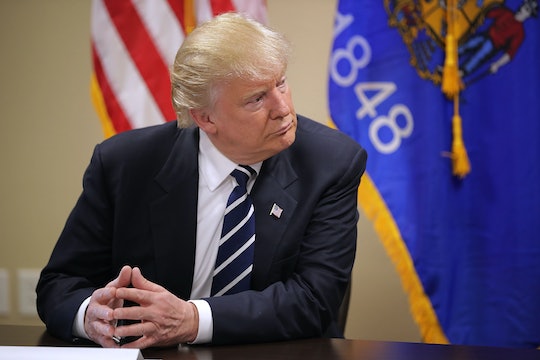 The KKK's Donald Trump Endorsement Speaks Volumes About His Campaign

Watching Hillary Clinton rack up almost every major newspaper endorsement across the nation, Donald Trump probably wished for a headline-grabbing endorsement of his very own. But, true to the old adage about being careful what you wish for, Trump got a backing about which he can't exactly brag, because it's from the official newspaper of the Ku Klux Klan. Yet although the Trump campaign may reject the KKK's endorsement of Donald Trump, the show of white nationalist support is completely unsurprising. Trump has been appealing to those voters throughout his entire campaign, and in the grand scheme of things, this sort of endorsement naturally feels like the next obvious thing.

The paper in question, the Crusader, devoted its full front page to an article about Trump, titled "Make America Great Again." While the article itself does not officially say it is an "endorsement," its author, Crusader Pastor Thomas Robb, told The Washington Post that it signaled the KKK's "enthusiastic support for his candidacy." So... it's an endorsement.

The article talks about Trump's campaign slogan, asking what "made America great in the first place." And, apparently,

Seemingly, the hope is that a Trump presidency can restore it to that former "greatness."

The Trump campaign did not immediately respond to Romper's request for comment, but it did release an official statement condemning the endorsement, saying, "Mr. Trump and the campaign denounces hate in any form."

But Trump's whole campaign has been about hate. This is the man who kicked off his presidential bid by calling Mexicans "rapists." Two of his most attention-grabbing campaign ideas have been to build a huge wall to separate the United States and Mexico, and to ban Muslims from entering the country. He's said and done plenty of other racist things throughout the campaign (not to mention throughout his life — don't forget about how the government brought a suit against him and his father for allegedly refusing to rent to black tenants, his calls for the Central Park Five to be executed, and his continued assertion of their guilt even after they were proven innocent, as well as his role in the racist birther movement designed to delegitimize President Barack Obama).

Trump knows what he's doing when he brings up racist ideas on the campaign trail. He knows it gains him a certain kind of support. After all, he told The New York Times editorial board that, at his rallies,

You know, if it gets a little boring, if I see people starting to sort of, maybe thinking about leaving, I can sort of tell the audience, I just say, ‘We will build the wall!' and they go nuts.

And although the Trump campaign came out with a statement rejecting the KKK's support this time, Trump has been slow to denounce white nationalists who have supported him in the past, famously failing to disavow David Duke's support when asked directly about it.