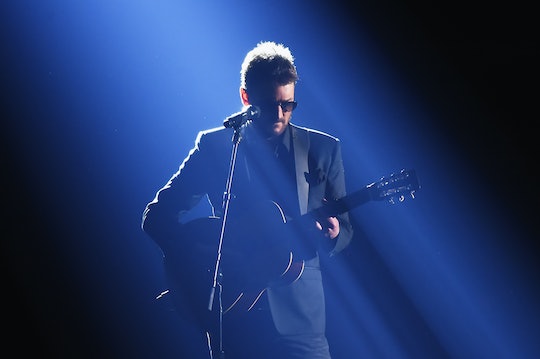 Although 2017 brought us many new songs by our favorite artists — along with some new faces to the music industry — the year was not without its tragedies. Music legends such as Tom Petty, David Cassidy, Chester Bennington, and more were lost. And tragically, dozens of music fans were killed at live music events because of unimaginable violence. The Route 91 Harvest Festival in Las Vegas was supposed to be a fun, light-hearted event. Instead, it ended in death, injuries, and lasting trauma. Tonight, the Las Vegas tribute at the 2018 Grammys honored the innocent lives that were senselessly taken too soon.

On Oct. 1, fans were gathered at the Route 91 Harvest Festival — a three-day event in Las Vegas that showcases some of the biggest names in country music, reported Time. Jason Aldean was on stage when a 64-year-old man opened fire from the 32nd floor of the Mandalay Bay Hotel and Casino. What was meant to be a fun night of country music and fellowship quickly turned into concertgoers' worst nightmare. More than 520 people were injured during the attack and a total of 59 were killed, according to the publication.

Although it wasn't specifically gun-related, another senseless loss of human life during a live concert unfolded on May 22 at Manchester Arena in England. As concertgoers started exiting an Ariana Grande concert. 22 people were killed by a terrorist carrying a bomb, reported CNN. Devastatingly, among the dead in this attack were children.

The 2018 Grammy Awards remembered the innocent lives lost during the Route 91 Harvest Festival in Las Vegas with a beautiful and haunting tribute. A special performance of "Tears in Heaven" by artists who appeared at the country music festival — Brothers Osborne, Eric Church, and Maren Morris — was featured at the award's show. Although there seemed to be technical difficulties before the song began, with names of victims serving as a background combined with the singers' soulful performance, I'm gonna go out on a limb and speculate that there wasn't a dry face in that entire crowd. Because Twitter definitely had a lot of feelings about the gesture.

“Live music events have always provided a safe space for fans to gather in a shared celebration of music. Sadly, that wasn’t always the case this past year,” Neil Portnow, President/CEO of the Recording Academy, said earlier in January, reported Variety. “We believe it’s incredibly important to pay tribute to those who lost their lives in these senseless tragedies and to remind musicians and music lovers alike that live music will continue to be a powerful force that unites us all.” Executive producer of the Grammy Awards, Ken Ehrlich, also chimed in with his reasoning behind the special gun violence awareness tribute, the publication reported. Ehrlich said:

"In many ways, our show encapsulates the year in music. Although that usually means a focus on achievement and excellence, sadly, last year was marred by a number of senseless tragedies that took place at live music events. We didn’t feel like we’d be doing our jobs if we didn’t reflect on these tremendous losses."

Although tonight was meant to celebrate the achievements of the past year in music, I'm so glad those in charge of the Grammy Awards chose to remember the tragic events that took place in 2017 as well. Gun violence is such an important social issue in itself. But using the platform of a major awards ceremony to bring awareness for this ongoing issues in the U.S. is incredibly honorable. I can only hope this tribute continues the conversation on gun safety and ultimately, leads to more stringent policies moving forward.