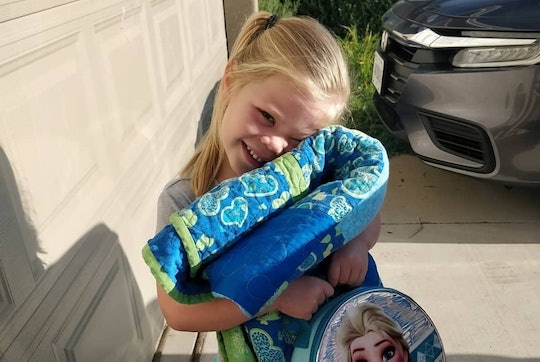 The Last Day Of Daycare Was Harder Than The First

Dropping off your kid for the first time is a whole thing. Whether at daycare, preschool, or kindergarten, that first drop-off is known to be one of the most emotional milestones of parenthood. But for me, the last day of daycare was the hardest.

I've been sending each of my two kids off to daycare since they were little babies. Working full time has always been a necessity for both my husband and me, and we returned to our jobs after a few weeks off for him following the birth of our children and a few months for me. I became used to sending my littles off to another's care, and my kids became comfortable with being in childcare, as well.

My firstborn, now 8-year-old son went to a home daycare after we had him. Both my husband and I were working as newspaper reporters at the time, and couldn't afford to take much time off. In our somewhat rural area, there were limited options for childcare. Still, we found an affordable home daycare near our house that took decent care of our boy in a house full of rowdy little kids.

One day when I went to pick up my then-toddler from his home daycare, the provider casually handed me a sealed envelop. I was devastated and stunned to discover that the envelop contained notice that she was terminating care of our son. Our son was in daycare part-time, and the provider wanted to fill his spot with a full-time child. Despite the sensible logic, her decision to hand me a letter instead of telling me in person was cowardly. I'd placed enough trust in her to watch my precious first baby when I wasn't there, and I expected more from someone like that.

The experience was eye-opening for me as a trusting first-time mom, and my husband and I selected future daycare providers with more care. A young, pregnant mom with a daughter my son's age brought her daughter to our house and watched my son during the summer until he was old enough to place in a preschool center. She was amazing, and we still follow each other on social media.

My son attended two different preschools before starting transitional kindergarten. Both preschools were wonderful, engaging places where he made close friends and was well looked after. Leaving each of those preschools was tough, and I shed some tears both times we left.

I handed the couple a card spilling out my soul, flowers, and a Starbucks gift card as I sobbed my eyes out.

There's just something about putting total trust in people who were previously strangers. Enough trust, in fact, that you leave the most precious humans in your life in their care. Returning after a long, stressful day in the workplace to find your kid not only fine, but happy, is a relief better than a tall glass of wine while enjoying a foot rub. It's only natural to develop deep affection and gratitude for those responsible for this peace of mind.

My appreciation has been strongest for the home daycare and preschool where my now 4-year-old daughter spent three years of her life. She was in a daycare center as an infant (where I also teared up saying goodbye to the wonderful teacher that was her primary caregiver), but moved to her home daycare at 1 year old.

Having gone through trial and error with my son, I was ready and willing to trust my instincts by the time it was time to find my daughter daycare. Her home daycare was run by a husband and wife team, both with teaching credentials. They gave her a cozy, loving, homey experience while also teaching her early academics. They learned her quirks. They helped nurse my daughter back to health when she had a broken leg.

I realized a few months ago that by some impossible warping of time, my baby will be starting kindergarten next year and we should probably move her to a more formal preschool. On the last day of her home daycare, I handed the couple a card spilling out my soul, flowers, and a Starbucks gift card as I sobbed my eyes out. They held back their tears as they gave me my daughter's baby blanket they'd kept for naps since she was 1. It was brutal. More painful than a school or daycare drop-off has ever been for me. How do you say "thank you" to someone for helping raise your child? The last day of daycare is the hardest.

The work of daycare providers matters so much, and I am beyond grateful.