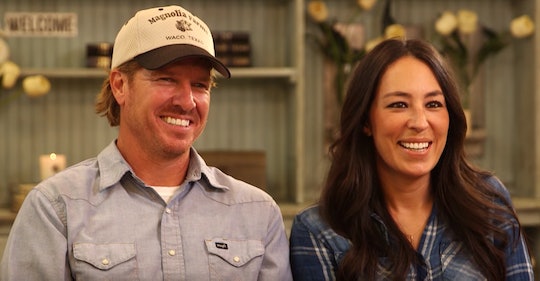 Chip and Joanna Gaines give a new meaning to the term "couple goals". Between filming their HGTV home renovation show, Fixer Upper (which is sadly in its final season), to managing their many businesses, to being parents to their four children (soon to be five) the Gaines' seem to do it all — and fans are pretty obsessed. But now fans have a new reason to fall even harder in love with the couple because the last episode of Fixer Upper reveals a cute inside story about Chip and Joanna that will make you remember why you fell in love with them in the first place.

If you're familiar with the Gaines' then you know that there are a few things that mean everything to them — their family and their collection of businesses in their hometown of Waco, Texas — especially their flagship store, the Magnolia Market. All of these things are highlighted on their Instagram accounts and on their hit HGTV show, Fixer Upper. While magnolia is the namesake of their business, it's also a type of tree that grows in the south (like Chip and Joanna's native state of Texas, according to Southern Living) and has beautiful white flowers on it. And this tree happens to hold a more significant meaning for both Chip and Joanna, according to People.

In a preview for the last and final episode of Fixer Upper (so sad) airing this upcoming Tuesday, according to People, Chip explained to his children why the magnolia holds such a significance to their parents. "You know what's interesting about the magnolia tree?" Chip asked his kids, according to People. "One of mama and I's first dates I climbed up a magnolia tree and I pulled her off a magnolia bloom and gave it to her." How sweet is that?

In the episode, Chip said, according to People:

We love magnolia trees. It really embodies our company. It's basically become our mascot. So every project we do, we love to plant a magnolia gem.

As if you didn't have enough reasons to fall in love with Chip and Joanna, knowing that they'd name their collection of famous businesses after a super sweet moment on one of their first dates makes their businesses and relationship seem all the more real and personal. It's not just about business, it's an extension of themselves as a couple and that could not be any cooler.

Seriously, the obsession with the magnolia flower runs deep between Chip and Joanna. As previously stated, their home store and market is named after the magnolia flower. But they also run a magazine called the Magnolia Journal, and just recently opened up a restaurant, Magnolia Table, in their hometown, according to Country Living.

Fans on Twitter seem to notice that Chip and Joanna are obsessed with magnolias, taking to the website to make a few jokes at their expense.

But now that they know the importance of the flower between Chip and Joanna — it's more than the name of their brand but part of who they are as a couple — they'll understand why it's so prominent in their business. And the fact that he explained this fact to fans through telling the story to his kids highlights how important family really is to Chip and Joanna.

But that really shouldn't come as a surprise — family comes first with the couple, and with a little one on the way, their priorities are in order. In October, Chip and Joanna told People that this season of Fixer Upper would be the last season so they could focus on their family. "We really want to focus on this break and take a step back to let this all soak in," Joanna said.

While fans will be sad to see the Gaines' leave their TVs and see less moments like these on their TV rest assured fans can see their hard work in their Magnolia string of businesses.