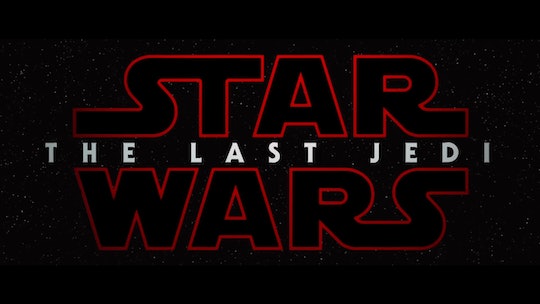 'The Last Jedi' Trailer Is Here

Friday just got a lot better for Star Wars fans, because The Last Jedi trailer is here, and it's amazing. The trailer debuted at Star Wars Celebration in Orlando. If you're unable to lock yourself in the bathroom for two minutes and watch the trailer (embedded below), I'll walk you through it. It looks like fans will be getting a little more background on Kylo Ren and Luke Skywalker's falling out, and as we all hoped, Luke will train Rey as a Jedi, right on the very island where they met at the end of The Force Awakens.

In fact, the first scene of the trailer is set on that island, with Rey on the ground, gasping and panting just as she did after having her vision in Maz Kanata's temple on Takodana. Then, we hear Luke seemingly talking her through another vision, and there's a slow-motion scene that looks like pebbles floating in the air around Rey's hand. Are they falling, or is this a callback to Luke's training with Yoda? Through voice-over, Luke asks Rey what she sees, and she tells him, "Light... Dark... A balance," apparently describing the Force itself. "It's so much bigger," Luke replies. This is happening, people!

So what exactly does she see? First, a shot of Leia at the Resistance base, then Kylo Ren's mask, smashed and lying on the ground, and then it gets super ambiguous. The final two shots will likely be analyzed for weeks or months to come, but my first impressions are a shelf of ancient books, followed by a gloved hand touching one of said books, which features the Jedi Order insignia. Voices are whispering throughout the vision, just like in The Force Awakens. After several listens, my guesses are Leia saying "I love you," Obi-Wan saying "seduced by the dark side," and the third one... I'm sorry; I've got nothing. Is it Yoda? Please tweet me if you figure it out.

After the vision, the action starts. There's some lightsaber training on the island, ships blasting red exhaust (what?!), Finn looking like he's in some kind of induced stasis (or just sleeping), Poe and BB-8 getting into hijinks, and the Millennium Falcon in a dogfight with some TIE fighters. Who's piloting it? Then we've got Rey running with the Skywalker lightsaber and Kylo trying to look menacing with his janky red one. After that, it cuts to a continuation of the flashback we first saw in The Force Awakens: Luke and R2-D2 looking on as a building (that's not the Jedi Temple) burns, followed by Captain Phasma leading a group of Stormtroopers through the chaos and destruction. Then, there's a quick shot of some new ships that look similar to Slave I — are they good guys or bad? – and it ends with Luke in a cave, saying, "I only know one truth: it's time for the Jedi to end." Respectfully, sir, I disagree. The Last Jedi opens on Dec. 15th.