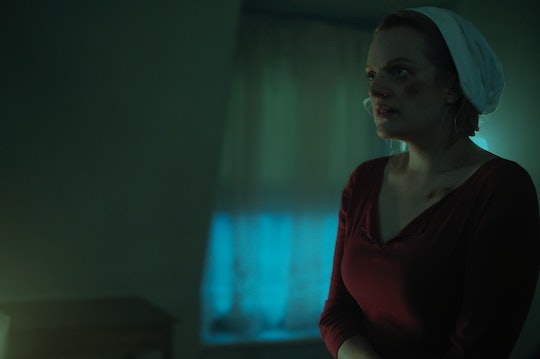 'The Handmaid's Tale' Found Strength In A Surprising Place

The fourth episode of Hulu's The Handmaid's Tale took its title from a Latin phrase that appeared multiple times throughout the episode: "Nolite te bastardes carborundorum." After being confined to her room following an altercation with Serena Joy in Episode 3 (Serena Joy believed Offred was pregnant when she wasn't, which somehow became Offred's fault), Offred discovered the phrase carved into a dark corner of her closet. Though she didn't know what it meant at first, she knew only one person could have left it there: the handmaid who served in the Commander's house before her. And because of that connection to her predecessor, the Latin phrase in The Handmaid's Tale became something that gave Offred strength.

Offred eventually did discover what the phrase meant when she had another illicit Scrabble-playing visit with Commander Waterford. She saw a Latin dictionary in his study and it inspired her to ask him what the phrase meant. He seemed surprised that she had heard it, but explained that it was a joke from his school days that meant (loosely translated), "Don't let the bastards grind you down." Learning that the previous Offred had presumably gotten this phrase from the Commander in the first place gave the current Offred some more insight into what had gone on in the house before she got there. More importantly, however, it gave her even more of a connection to the woman who came before her.

The Latin phrase left behind by Offred's predecessor made a few things clear. It proved that the previous Offred had also had some kind of relationship with the Commander, which gave Offred information. It could have been a potential warning, because the first Offred took her own life in that house. And it created a bond between both Offreds even though they had never met. Offred called the previous Offred a "friend" despite the fact that they never knew each other, because she knew that woman was the only one who knew exactly how she felt. She had, quite literally, been Offred.

The Handmaids were made homogeneous on purpose, stripped of their real names and dressed in identical red cloaks and white hats that obscured their faces. The system set them up to spy on and even betray each other. But their forced unity also bonded them together. The Handmaids were the only ones who truly understood each other and they expressed that in small, secret ways, like scratching messages into walls. When continuing on in an oppressive world was too much to handle, they were able to support each other because they understood.

When Moira carved words into the walls of the Red Center, she said it was to show the next woman who came there that she was not alone. That was what the first Offred did by leaving that phrase behind. "Nolite te bastardes carborundorum" gave Offred the ability to find new resilience not only because of what the phrase meant, but because its existence proved she wasn't alone.