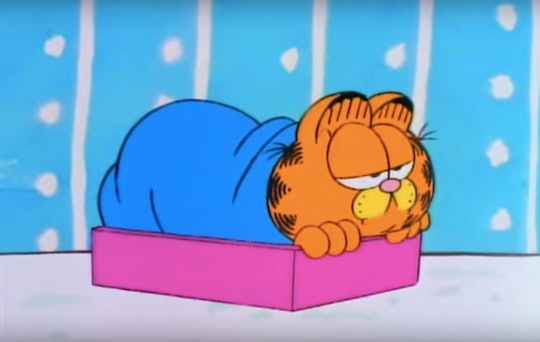 It is a smoky late-summer afternoon in Seattle, and my kids aren’t fighting right now. My son is reading in his room, my daughter reading beside me on the couch, her neck against the armrest and a book propped on her knees. Her lower lip juts out in furious concentration. She has not moved in 20 minutes except to turn pages.

They are both reading Garfield collections: Garfield Shovels It In and Garfield: Large and In Charge. Left undisturbed, they will do this for hours at a time. My daughter has only recently learned to read, and she likes the low ratio of words to pictures. It tickles her to be reading something meant for adults and older kids: no Biscuit’s Day at the Beach for her.

Jim Davis began drawing Garfield, about sad-sack cartoonist Jon Arbuckle and his greedy, lazy, cruel cat, in 1978. It still runs daily in many papers, and there are now at least 50 books of collected strips, plus more books based on TV specials, all of which my kids haul home from the public library by the dozen and fight over like, well, Garfield and Odie.

Not much happens in the strips. Garfield eats Jon’s food and houseplants. He’s mean to Odie and spiders. He’s sometimes kind to mice, but only as an ornate expression of his own laziness: he refuses to serve Jon by hunting them. He’d rather nap than do almost anything except eat. And he’s always pleased with himself.

The drawings range from basic to rudimentary. We see little of the local landscape, compared with, say, the textured, expressionist woodlands and moonscapes of Calvin and Hobbes. The few characters all look pretty similar, both the humans and animals, with oversized eyes that can be quizzical, amorous, sarcastic, bored, or neutral, depending on the eyelids. Jon’s clothes are generic, deliberately dull. Jon is, in fact, bored and depressed, the quietly despairing foil to Garfield’s self-satisfaction. (An entire website, Garfield Minus Garfield, is dedicated to pointing this out by running strips from which the cat has been carefully erased, so that we are left with a lonely guy talking to himself. The result is a long essay on the solitary mind.)

Weirdly, for such a popular and long-running strip, Garfield is not really all that funny — at least not to me, not now. But my son can’t get enough of them. He reads strip after strip to me in the car. I’ve told him to read only really good ones, but to him they are all good ones. It’s the same tiny handful of jokes over and over, most of them cruel. Garfield is sitting alone in a room, then Odie enters and stands behind him. “Did it just get stupider in here?” asks Garfield.

Right now, my kids would rather read Garfield than do anything else, including talk to me or my husband. We’re beginning to wonder if this is a pathology.

If so, quality literature is no cure. They’ve read Roald Dahl and Narnia and Beverly Cleary and Harry Potter and E.B. White and Judy Blume. Also Charles Schultz and Bill Watterson and Dav Pilkey and Gene Luen Yang and Ben Hatke. They just prefer Garfield. Surprise.

How many panels did Jim Davis draw in which Garfield lies on his back, eyes closed, one finger in the air, declaring something or other?

Judging by the extremely well-thumbed Garfield paperbacks at our public library, they are not alone. Once, when there were none to be had, my daughter asked for help from a librarian, who went into a back room and came out with four books. A man and his son approached us a few minutes later. “Excuse me,” he said. “We were wondering where you found all those Garfields.” We did not offer to share. Garfield is not that kind of role model.

Many of our friends’ kids have recently gone through the same phase. One couple we know banned the cat because they noticed an uptick in bad behavior — mostly sibling taunting and refusal to do chores — after periods of Garfield-reading. I understand, but this goes against the grain for me. So many of my favorite books, for children and adults, are about bad people, or people who are largely bad. Banning books with nasty characters feels like a slippery slope.

Is it as bad as I remember? Garfield wrestles with his conscience, then kicks Odie off a table anyway. The sentient bathroom scale makes a fat joke at Garfield’s expense. Jon is unsuccessful at asking women out because they can smell his desperation. I tell my pensive 8-year-old that dating is actually more fun than Jon makes it seem, even though I’m not sure that’s true. I start gathering the Garfields into a pile to take back to the library.

Still, for my money, the difference between blooming, sweet-natured Heidi of the Swiss Alps and sallow, petulant Mary Lennox is why The Secret Garden is a better book than Heidi. And Garfield is certainly a Mary. The bag sits by the door, and two days later the books have re-dispersed throughout the house.

“I hate this diet you put me on,” says the 6-year-old when I say no to a second bowl of ice cream.

“Sweetie, you are not on a diet. Anyway, ‘diet’ just means what foods you eat.”

The books go back in the bag.

Meanwhile, the library keeps emailing to tell me that Garfields I requested have arrived at our branch and are ready for pick-up. (I let my son use my account.) Lard of the Jungle. Wide Load.

In some ways, Garfield’s appeal to kids seems strange. He loves coffee and lasagna. He hates Mondays and dieting. Jon is haunted by boredom and loneliness. Aren’t these the pleasures and anxieties of adulthood? My kids prefer plain noodles, loathe even the smell of coffee, and don’t understand many of the jokes to do with Jon’s love life, which has stayed firmly in the world of the ‘70s even as the decades have rolled by (as recently as 2015 he tried to swim in a public pool while wearing a chest toupee and was still using the word “macho”). And why does Garfield hate Mondays when he doesn’t work?

As a child, I was often bored. At the time, I think I disliked the sense that my days were endless, shapeless, always repeating, especially in summer. In retrospect, it seems like a kind of paradise. Patricia Hampl’s recent memoir, The Art of the Wasted Day, is in part about that feeling, that state of timelessness, as the root of creativity. Her book is about the beauty of getting lost in thought. Of course, Hampl was daydreaming, wandering through the corridors of her own mind, not reading Garfield. But still. You have to let the mind roam free to end up with a mind like Patricia Hampl’s.

Still, I worry about the persistent cruelty, the belittling humor. My kids have always fought each other mercilessly, but Garfield probably isn’t helping.

Is laughter always necessarily a dark, chaotic, antisocial force? I don’t think that’s true. Arnold Lobel’s gentle Frog and Toad books, for instance, are funny because of Toad’s many foibles. He is anxious, lazy, and inflexible — in very recognizable ways. But Toad’s shortcomings are always pointed out against the backdrop of the love the cheerful, easygoing Frog has for him. There are moments when even Frog laughs at Toad. He has to. But their friendship goes on. It’s one of literature’s great love stories.

But for the kids right now, Frog and Toad is babyish. Garfield has all the allure.

Here’s the thing: I know that allure. Once upon a time, I read Garfield for long stretches on summer vacation. I remember lying for hours, on no kind of schedule, to my mother’s annoyance, marinating in the life and times of the cat, sometimes on my bed, sometimes in the backyard or on the dining room floor in a patch of sun. It was not hard to imagine that I was Garfield, serene in my laziness.

I could have been practicing the piano or reading about a good role model like Nancy Drew or Meg Murray or helping my mother do yardwork or writing letters to my Australian pen pal Yvonne or earning money by babysitting or dog-walking. But Garfield drew me in like a nap-inducing sunbeam. Its predictability was comforting. How many panels did Jim Davis draw in which Garfield lies on his back, eyes closed, one finger in the air, declaring something or other?

The total lack of self-improving message was comforting, too. This was not a book that was asking me to become anything. Garfield’s extreme idleness was a pleasure to read about and mimic, and more than a pleasure. There was something deeply restful about it.

My kids’ creaturely drives are still pretty naked and unmediated ... they’re old enough to know they can’t go around acting like Garfield, but they’d love for that not to be true.

My husband has similar memories. A mention of Garfield brings back the same happy scenes, specifically of the sloth and excess of reading about him. People remember reading Garfield as a way of transmogrifying into Garfield, the inert, happy centers of our own worlds.

I think this is the real reason I haven’t taken the books back to the library yet. I want my kids to bask in that feeling of expansive time while they can. During the school year, in order to get everyone out the door on time, our morning schedule is choreographed down to the minute. Maybe these afternoons are restoring them after all that rushing, allowing the mind to regain its balance.

The other day I said to my son, without really thinking, that Garfield is pure id. Then I had to explain Freud’s model of the psyche as best I could.

Right now, my kids’ creaturely drives are still pretty naked and unmediated: rage, desire, dread, rivalry, longing to be loved and seen as special. Meanwhile, the voices telling them they need to govern their impulses in order fit in — with our family, among friends, on a sports team, with their classes at school — are getting stronger. They’re old enough to know they can’t go around acting like Garfield, but they’d love for that not to be true.

This summer I worked more than normal, anxiously staring at my laptop and grumbling. They see adult life coming for them, and right now it probably does not look all that great.

Why do I now find Garfield a little repulsive? Maybe I’m just jealous. I’m sure that’s what he would say.

More Like This
24 Children's Books For Your Dino-Loving Kid
If Your Kids Love Their Elf, You Don't *Have* To Put Him Away On Christmas
30 Great Non-Toy Gift Ideas For Kids
15 Elf On The Shelf Printable Letters From Santa