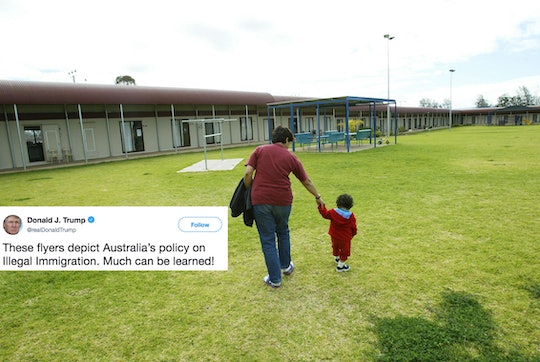 (AUSTRALIA OUT) A mother and child in the Blue 1 Family Compound at the Baxter Detention Centre at Port Augusta in South Australia, 28 July 2004. AFR Picture by BRYAN CHARLTON (Photo by Fairfax Media via Getty Images)

Trump Is Wrong: You Don’t Want To Be Us

When President Donald Trump says he wants a wall, what he really wants is an ocean. That’s the gist of his support for Australia’s hard-line stance on immigration, which is defined by remote and offshore detention centers and a no-tolerance policy for those who jump the queue. Trump tweeted Wednesday in support of Australia's policy, intimating that "Much can be learned!"

“Stop The Boats,” your slightly racist Australian aunt will tell you, is a mercy — it will stop immigrants making the dangerous voyage to the northern shoreline of Australia across the volatile Torres Strait, proponents say. Well, Australia is my country and I can tell you the effect of this policy: media blackouts on the conditions in the camps, self-immolation, rampant depression ("suicide attempts are frequent," noted a 2019 UN report on human rights abuses five years into the situation), and sexual abuse of children. This is what you can learn from Australia's policy on human rights.

You don’t want this nightmare for yourself.

The decades-old immigrant crisis in the U.S. has flared up in the public conversation this week after news broke of the inhumane conditions that small children separated from their parents are enduring on the southern border — lawyers spoke to the New York Times' Caitlin Dickerson about the lack of soap and toothpaste, and scenes of 7-year-olds being told to look after 2-year-olds in the camps. The kids are there, of course, because the U.S. Customs and Border Patrol enacted a legal tripwire last year by prosecuting those who cross the border into the U.S. without documentation, then using their incarceration as a trigger to separate them from their children.

You could erect a Ninja Warrior course between a family and their safe haven on the U.S. border, and you would only heighten their chances of perishing.

People have been dying for years in the desert, in their violence-ridden countries, and en route to safety, but the image from the Associated Press of drowned El Salvadorean father Oscar Alberto Martínez and his toddler Angie Valeria is so tragic — the little arm still gripped over her father’s back, looking as though the two of them are playing hide and seek on the riverbank of the Rio Grande — that the cognitive dissonance Americans feel at knowing they are, as citizens here, complicit, became freshly painful.

Trumps’s instinct is to blame President Barack Obama, or the parents themselves. To imply that erecting a pool fence would keep these kids out of the drink — you know, that we don't need a more intelligent migration policy, we need a bigger, taller wall with a smaller door that can only be operated by someone all-knowing of what America's best interests are.

Trump's primitive belief that a permeable border — in a desert landscape hostile to even prepared travelers — is the problem, is laughably simple. Australia is surrounded by ocean, its prickly and distant shores sparsely inhabited, and it is no deterrent. You could erect a Ninja Warrior course between a family and their safe haven on the U.S. border, and you would only heighten their chances of perishing.

Writing for Mother Jones this week, Malcolm Harris pondered the lack of civic action — the lack of neighbors intercepting ICE agents on their merry way to work, the fact we haven't all packed up our desks and walked to the border ourselves to go get the kids: "One reason I think we’ve been arguing about the name of the camps is that life in the shadow of concentration camps is not supposed to be worth living."

Plus it feels so far away.

It feels far away here in the United States; in Australia, we have hidden these families on remote islands and in dusty tracts of land far from the cities. There, we have fewer people to wrangle into a consensus on what a human fleeing violence, devastation, or persecution deserves in Australia — just 24.6 million to the U.S.'s unwieldy 327.2 million — and a greater share of immigrants. More than one in 4 Australians was born overseas, or 28.7 percent, per the Australian Bureau of Statistics, while in the U.S. the figure is around 13 percent: we all fancy ourselves multicultural. And yet we have voted for those who trumpet closed borders and zero-sum calculations about global wealth again and again. Australia's annual "quota" for refugees is 20,000 — if you don't make the cut this year, it's "sit tight until next year, wherever you are (but definitely not here in Oz). In 2018, Trump cut the U.S. quota to just 30,000 (again, in a country of 300 million people). Last year, Canada admitted 28,000 refugees, the U.S. just 22,000, per The UN Refugee Agency. It is a policy of turning people back whether or not they go through the correct channels, and wait in line.

"Stop The Boats," isn't just a slogan: the Australian government has a policy of intercepting boats before they enter Australian water, so they don't become our problem. If you choose to see it that way.

"While these events did not take place in Australia's waters they are equally devastating and equally tragic," opposition immigration spokesman Scott Morrison said in 2011, when a fishing boat carrying asylum seekers — parents and children — from the Middle East sank on the way from the island of Java to Australia. It is far from an isolated incident. You can find a neat table of deceased migrants, noting the count of child fatalities, through the years here.

And today, Scott "equally tragic" Morrison is the prime minister.

I am Australian. My extended family contains refugees. When Trump points to Australian model of migrant deterrence, you don't want to be us — trust me.

It was unbearable to come upon the image of Oscar Alberto Martínez and Angie Valeria drowned in a river this week. Now imagine that that river was an ocean.