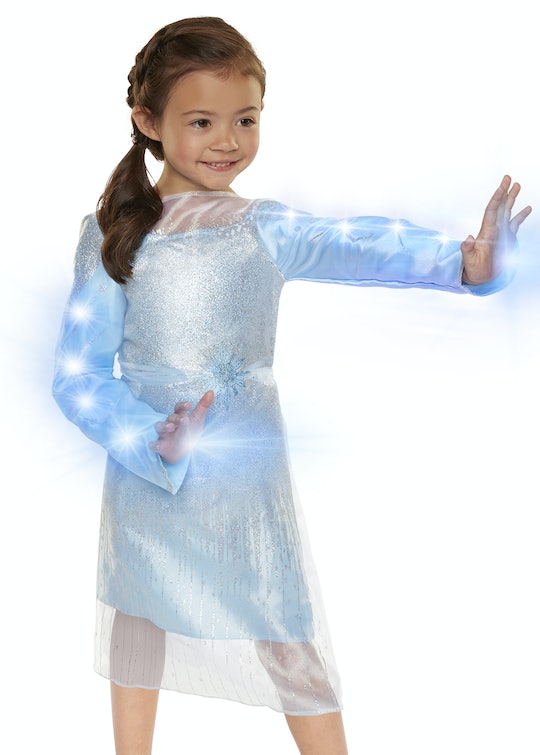 Few movies can match the impact of Frozen, because practically all kids (and plenty of adults) still know every lyric to "Let It Go" by heart. But it looks like the sequel will bring its own type of magic to the big screen. If the Disney Frozen 2 Elsa’s Dark Sea Dress at Target is any indication, this second film will also pack in plenty of awe-inducing moments. Seriously, not many franchises can release new Halloween costumes before the latest film is even out.

But you don't even have to be familiar with the source material to appreciate this amazing costume. First of all, the Target-exclusive Elsa's Dark Sea Dress includes motion-activated lights and sounds from the film. Yes, its sleeves light up whenever your kid moves their arms around, which is very cool indeed. The design itself is inspired by the dress Elsa wears as she battles the Dark Sea in the second film. Plus the outfit includes a sheer "frosty" neckline and an allover glitter print. It's available in sizes 4 to 6X. Whether your kid is looking for a Frozen-inspired Halloween costume, or they simply want a cool dress to wear at the movie's premier, this Elsa dress is pretty magical. Chances are, you kid will love wearing it while singing songs from the new film.

Although this dress is available in time for Halloween, there's still a bit of a wait for Frozen 2's release date later this year. Frozen 2 will hit theaters on Nov. 22, 2019, in both the US and the UK, according to BBC. Although the trailer hints at plenty more magical adventures for Elsa, Anna, Kristoff, Olaf, and Sven, it looks like everyone will have to wait until late November to learn what the next film is all about. From glimpses in the trailer, however, it does look like the Dark Sea scene referenced by the Target dress is going to be absolutely epic. Elsa's powers seem to be stronger than ever.

To be fair, the sequel has to live up to quite a legacy. Released in 2013, Frozen is the highest-grossing animated and musical film ever, earning a worldwide box office gross of over $1 billion, according to IMDB. Kristen Bell, Idina Menzel, Jonathan Groff, Josh Gad, and Santino Fontana gave unforgettable voice performances to the characters, and the animation sequences played with snow and ice in some jaw-dropping and beautiful ways. It's no surprise that Frozen 2 could be one of the most-anticipated sequels ever. In other words, your kids are far from the only people out there who are basically overwhelmed with excitement for this movie.

So to help your kid count down the days until the movie's release, there's a whole selection of Frozen 2 toys, clothes, and other goods available at Target. There are plenty of other ways to help your kid channel their inner Elsa, in other words, as well as stock up for those inevitable Frozen-themed birthday parties in the coming year. However you decide to count the days until the sequel's release, a costume from Frozen 2 is a fun way to encourage your kid's imaginative, magical play.