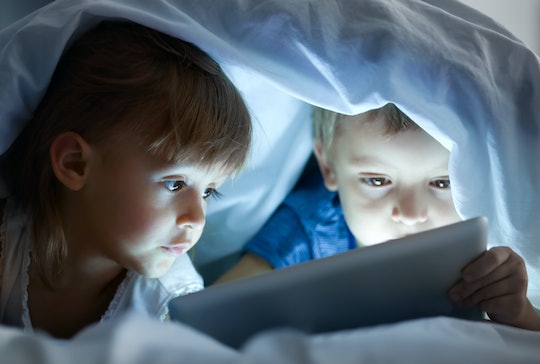 Overall Screen Time Has No Link To A Child's Performance At School, Study Says

The topic of screen time continues to be a source of debate among parents, as the jury is still out on how much of it should be allowed. Although some research suggests too much screen time can affect a child's development negatively, especially where it pertains to school, a new study suggests the link between academic success and screen time isn't as straightforward as you might think. In fact, researchers believe the amount of time spent on screens won't hurt your child's grades. But before you hand the iPad over, I must point out the catch to this finding.

Researchers at University Jaume I in Castellon, Spain, reviewed 58 studies on screen time from 23 countries, involving more than 480,000 kids aged 4 to 18. They also combined the results of 30 studies involving 106,000 children to further investigate the effects of screen time on learning. They published their results on Sept. 23 in the Journal of the American Medical Association (JAMA), outlining how it's not the length of screen time that can affect a child's academic performance, but rather the quality of what they're watching or playing.

Overall, researchers discovered television and video game consumption might be the two biggest culprits when it comes to potentially having a negative effect on academic success. And although there was no concrete link, television viewing was associated with lower overall academic scores affecting both math and english skills, while video games were linked to low grades. It seemed to affect teens more than any other age group, according to CNN.

The takeaway? Parents can probably relax in regards to the amount of time their kids spend on screens... if it's mostly educational. "It's important for parents to know there's no real data to suggest that a large amount of screen time interferes with function," Dr. Victor Fornari, vice chair of child and adolescent psychiatry at Zucker Hillside Hospital in Glen Oaks, New York said. "These studies show it's really not the amount of the screen time, but the quality of the screen time.

The next step for researchers is to break down how kids use their screens and compare it to their productivity, Janis Whitlock, a research scientist with the Bronfenbrenner Center for Translational Research at Cornell University in Ithaca, New York said, according to U.S. News and World Report.

"I also suspect we're talking about a lot of TV," Whitlock added. "We're not talking about a couple of shows a night, I don't think. These are kids who are spending huge amounts of time passively watching television."A

The same can be said for video game usage, with Whitlock noting, "Video games can become a really major time suck. Gamers have a really hard time stopping. You can go on for hours and hours."

If you're thinking it might be impossible to curb screen time in this day and age, you aren't alone. So much of what kids do nowadays is focused around the computer, phone, television, or video game console. In fact, it's just a part of life living in the 21st century.

"This study just clarifies for me that life in the 21st century is so vastly different than it was 50 years ago. Tasks we used to do unrelated to a screen now involve a screen," Dr. Fornari said, according to WebMD. "Reading a book is on a tablet now, and reading a magazine in on your laptop, and playing a game is a video game, and connecting with friends means you're on social media."

Despite this, there are lots of things parents can do to curb their child's media use. Common Sense Media, for instance, suggests monitoring your child's behavior during and after media consumption. If it's poor, then you might want to cut back or make sure that what they're looking at is truly age appropriate. They also suggest making a media schedule of when, where, and how kids can look at media throughout the day.

Furthermore, the American Association of Pediatrics has some pretty strict guidelines about what amount of screen time is appropriate for each age group. Its recommendations state:

As technology continues to evolve, screen time management will only get more complicated for parents. But perhaps there's some justice here because when today's kids are parents themselves, they'll see just how hard it is to pry a video game controller out of a sweaty little hand. Until then, keeping tabs of what your child watches and for how long is the safest bet in ensuring it doesn't affect their school performance down the road.