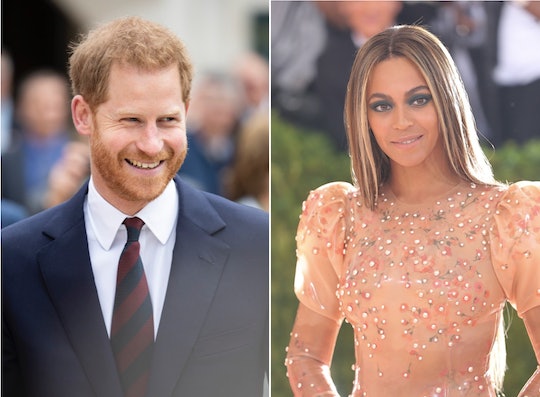 There are only a few celebrities that could break the internet upon meeting, and two of them may have that chance very soon. That's because the British premiere of The Lion King may bring Prince Harry and Beyonce, who stars in the film, together in the same place, upon which, I believe, angels will sing. Consider also that Meghan Markle could show up for the meet-and-greet and, in that case, prepare for time to stop.

More Like This
Prince Edward Addressed Royal Family "Rift" Like An Uncle Who Wants Everyone To Get Along
Meghan Markle & Prince Harry Are Parents Of 2!
Meghan & Harry's Lawyers Call BBC Report About Lilibet’s Name “False & Defamatory"
The Queen Met Her Newborn Namesake Lilibet On a Video Call

The premiere is set for July 14 in London’s Leicester Square, according to Hello! Magazine, and royal reporter Omid Scobie broke the news that Prince Harry will be in attendance. And though it’s sure to be an excellent night at the movies, it won’t be purely a recreational visit for him. According to Scobie, the Duke of Sussex be there in support of conservation efforts to protect wild lions in Africa.

In conjunction with the movie, Disney has created a campaign called #ProtectThePride that will work on behalf of lion conservation efforts, according to Town & Country. Scobie shared on Twitter that Prince Harry will meet with some reps from environmental organizations including Wildlife Conservation Network. Both Prince William and Prince Harry are well-known for working on behalf of environmental efforts, according to Town & Country.

Indeed, Africa has long been a particular focus for Prince Harry. In fact, Markle and Prince Harry vacationed in Botswana early in their relationship, according to House & Garden, and the family enjoy the continent so much that they were planning to return there soon. According to CNN, they have a royal tour in the works for South Africa, Malawi, Angola, and Botswana.

Marie Claire reported that Markle is also interested in attending the film’s premiere event, though she’ll probably wait until closer to the date to see how she’s feeling. Prince Harry and Markle went to a performance of The Lion King in London in 2016, according to Hello Giggles, so this would be a sweet throwback for them.

And I think Beyoncé would probably love to meet the duchess... remember this portrait she posed with?

Beyoncé is just one of the big names that will be attending the premiere. Chiwetel Ejiofor, Pharrell Williams, and Elton John are all expected to be there as well, as Marie Claire reported. John is already friends with the couple, having performed at their wedding reception, according to Page Six.

Beyoncé, of course, plays Nala in the live-action remake and recently posted a video to her YouTube channel giving just a hint of her voice acting. On June 3m a 30-second clip was uploaded featuring her voiceover telling Simba that he needs to come home.

And just one day earlier she capitalized on the lion theme with a custom outfit for the Wearable Art Gala which she attended with her daughter Blue Ivy, according to Vulture. Her fierce lace jumpsuit featured a feathery lion print bodice and long taffeta cape, and Blue Ivy wore an African-inspired dress and headband.

Fans will undoubtedly be waiting on pins and needles to see if she shows up in something similarly exciting to this premiere, or if she’ll keep it all classy for her brush with royalty.

Look for The Lion King in theaters on July 19, and hopefully some selfies of Beyoncé and Prince Harry together before then.