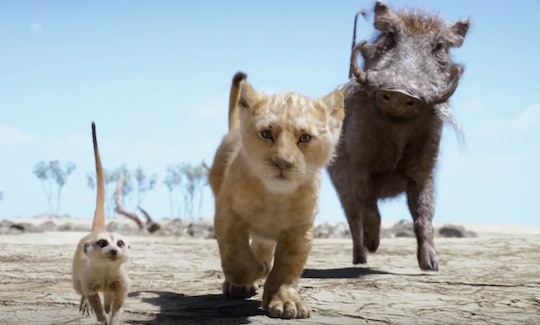 A Tiny Taste Of "Hakuna Matata" From The New 'Lion King' Is Here & Guys, It's SO Good

In just a few short weeks, the 2019 CGI-animated remake of The Lion King will finally hit theaters. In the months leading up to its premiere, Disney fans have gotten a taste of the music, the animation, and the scenery. And this week, Disney released an incredible new clip that teases the 2019 version of "Hakuna Matata" in The Lion King. And, wow, it's just as amazing as you probably imagined.

There are so many reasons to be hyped up to see the new version of The Lion King; one of which is the incredible music, of course. The soundtrack to the film will not only feature the classic songs introduced in the original animated movie, but will also have a brand new song on it co-written by Elton John, according to Billboard. The singers behind the soundtrack are even more powerful — Beyoncé is voicing Nala and Donald Glover (also known as his rap stage name, Childish Gambino) is voicing Simba. Clearly it's going to be one very awesome album.

But until that soundtrack is released, people can relish in the snippets of songs from the movie that Disney is generously releasing ahead of the film's July 19 premiere. In a new TV spot for the film, a bit of "Hakuna Matata" can be heard for the first time, and it sounds so good.

The new featurette takes audience members behind the scenes of the making of the film, allowing people to see the stars record their lines for The Lion King and hear their thoughts about being a part of such a big film. But the most exciting part about this featurette is the fact that people can hear "Hakuna Matata", sung by actors Billy Eichner, Seth Rogen (who play Timon and Pumbaa, respectively) and Glover for the first time. This version promises a new take on the original song, with brand new, realistic imagery to add to the whole entire experience.

Needless to say, the film's director, Jon Favreau is excited for everyone to hear the full versions of the songs. "It's nice to have actors who are both the performers and the singers," he said in the video. "These are real musicians bringing their creative voices to this."

But even Eichner and Rogen, who aren't especially known for their musical talents (unlike their major costars) are ready to put their own spin on the super uplifting "Hakuna Matata" that is different from the one featured in the 1994 film. Eichner expressed to Entertainment Weekly in May that viewers might be surprised by his take on it. "I lean into [the song] a little bit more, and I think that's another way that this version is distinct: Timon's singing voice in this version is different than the original, and I think that adds a different flavor to it," he said.

Based on the preview for the new version of "Can You Feel The Love Tonight?" people are not ready for the amazing music in store with this new movie.

These new teasers are just making people even more excited for the film to premiere on Friday, July 19, and those same exact people are preparing for it right now. Advance ticket sales for The Lion King are already breaking box office records for this year after they went on sale late last month, according to People.

Beyond getting to see your favorite characters come to life on the big screen again, the soundtrack is just another reason to get pumped about seeing The Lion King in theaters in just two weeks.