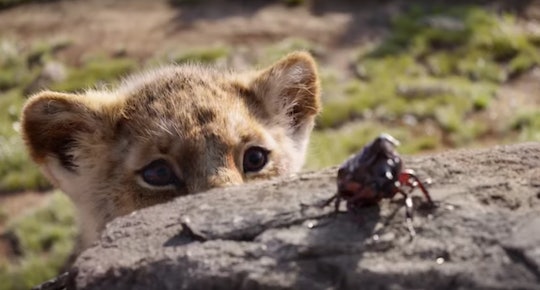 This July, the live-action remake of The Lion King is hitting theaters, and people are already beside themselves with excitement. On Wednesday, April 10, The Lion King's first trailer dropped and it gives viewers a gorgeous, vivid sneak peek at all of the major characters you'll see in the beloved Disney classic this summer.

The circle of life will soon come to life on the silver screen, and the newest Lion King trailer teases how it will look come July. In the stunning new trailer, Simba grows from a cub to a young lion ready to take back the kingdom from his uncle, Scar, while making a few friends along the way.

The trailer brings viewers straight to Pride Rock, where you'll see Simba learning from his dad, Mufasa. But not everything is smooth sailing — as lovers of the 1994 Disney animated movie know, trouble lies ahead with Scar.

The first official trailer for the film instead focuses on Simba's adventure, giving viewers their first full look at Nala (voiced by Beyoncé) and the hilarious Timon and Pumbaa, who you can hear singing "The Lion Sings Tonight" at the end of the trailer.

The entire trailer is incredibly epic and worth watching on repeat.

There are just a few major things left out of the trailer. People haven't had the chance to hear Simba (voiced by Donald Glover) or Nala speak. And people haven't heard anything from the film's epic soundtrack. But there are some things worth waiting for and hearing both of them talk (and sing in the film) will definitely be worth it — at least, Billy Eichner (who voices Pumbaa in the film) seems to think so.

During a recent appearance on the podcast, Keep It, Eichner hinted about Beyoncé's powerful role in the film, according to People. "She's definitely in the movie, because I've seen a rough cut," Eichner said. "And I've heard her sing 'Can You Feel the Love Tonight?' with Donald Glover and I'm telling you it's f— good."

"I do not want to give too much away, they do not want us talking about it," he added. "I will just say, it made me cry and I was not expecting that."

Needless to say, people on Twitter are already freaking out over the film:

The good news? There are just 100 days left until the film makes its way into movie theaters on Friday, July 19. So get your countdowns ready, because The Lion King will be here before you know it.

Although this trailer might not reveal everything that some fans would have loved to see, this full length trailer gives fans more than they ever have seen before. Up until now, people have only seen the teaser trailer for the film, which showed an adorable baby Simba, gave a glimpse at what Pride Rock looks like, and showed off the epic CGI animation.

The next 100 days cannot go by any faster. The Lion King needs to hurry into theaters.