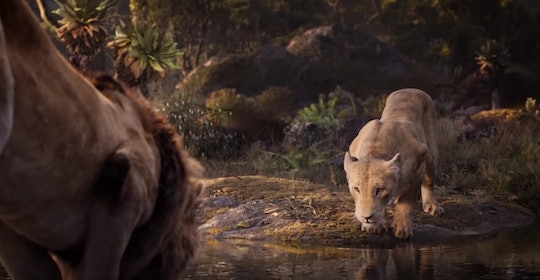 There are so many reasons to be excited about the live-action remake of The Lion King and, yes, almost all of those reasons have to do with Beyoncé. Queen Bey is, after all, voicing Nala, the main love interest and childhood friend to Donald Glover's Simba. So of course, The Lion King's Young Nala, Shahadi Wright Joseph, had a very relatable reaction when she found out she'd be sharing a role with the one and only Beyoncé.

In The Lion King, a young Simba runs away from his home after witnessing his dad die in a stampede. With the help of Nala, he is able to unite his tribe back together. These two roles are huge, so it only makes sense that Beyoncé, one of the most powerful voices in the world, was cast to voice the adult version of her. There really isn't anyone better to fill the role.

But this meant that 13-year-old Wright Joseph, the voice of Young Nala (who also had a huge role in Jordan Peele's Us) had some big shoes to fill. In the new issue of Entertainment Weekly, the young actress said that she freaked out when she heard she found out Beyoncé would be playing the older version of her.

Considering that Wright Joseph has an impressive resume already and her career is really just getting started, she's clearly perfect for the role. But working with Beyoncé will make anymore panic with excitement a little, and the young actress wasn't alone in that feeling when she found out that Bey would be in the film.

When it was first announced in 2017 that Beyoncé would be voicing Nala in The Lion King, people on Twitter were ecstatic. "It's not called The Lion King anymore," one Twitter user wrote. "If Beyoncé's in it, it's called The Lion Queen. It's Nala's movie now."

Considering how happy fans were by the news, it's pretty relieving that the cast of The Lion King (which is filled with some pretty huge names like James Earl Jones, Seth Rogen, and Alfre Woodward) were just as thrilled to learn Beyoncé would be joining them in the new remake.

The film's director, Jon Favreau (who directed the 2016 remake of The Jungle Book) told Entertainment Weekly that he credits Beyoncé's three children, 7-year-old daughter, Blue Ivy, and 2-year-old twins, Rumi and Sir, for her signing on to the movie.

"I think that part of [her joining the movie] is that she's got young kids, part of it is that it's a story that feels good for this phase of her life and her career, and she really likes the original very much," he told Entertainment Weekly. "And then of course, there are these wonderful musical numbers that she can be involved with, and my God...she really lives up to the reputation as far as the beauty if her voice and talent."

But Beyoncé fans haven't gotten the chance to hear that just yet. In the first official trailer for The Lion King (which was released earlier this month), Nala can be seen for a brief moment. Rest assured, though, the wait to hear her in the movie will be worth it. Last month, during an appearance on Crooked Media's Keep It podcast, Billy Eichner (who plays Pumbaa) said that Beyoncé's duet with Glover of "Can You Feel The Love Tonight?" blew him away, according to People. "I will just say that honestly, it made me cry and I was not expecting that," he said.

It's just as likely that all of Beyoncé's fans will have similar reactions when the movie hits theaters on July 16.

More Like This
Is 'Hocus Pocus' Too Scary For Kids Under 5?
'Hocus Pocus 2' Gives Us A Glimpse Of The Sanderson Sisters As Kids
Disney+ Just Added A New Sing-Along Version Of The Nightmare Before Christmas
The Hocus Pocus 2 Soundtrack Is A Spooky Mix Of Old & New