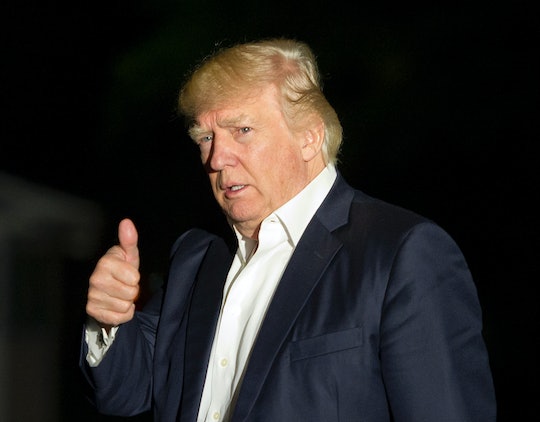 If the results of the Nov. 8 presidential election ruined you emotionally, then you've probably spent a decent amount of time since then wishing that someone, somewhere, would finally say to his face some of things so many Americans these days are feeling. On Sunday, a clip quickly went viral on Twitter, in which a young girl appeared to tell the president exactly how much she disliked him. It turns out that the little girl telling President Donald Trump he's a disgrace isn't actually real, but the fact that it resonated so strongly with so many people on social media probably says a lot about the way people are feeling about the Trump administration these days.

According to Gizmodo, the viral clip in question was part of a sketch on Comedy Central's The President Show, a weekly political satire program featuring actor Anthony Atamanuik as Donald Trump. In the original video, Atamanuik can be seen impersonating the president at an anti-Trump protest, and while he's got the Trump look and mannerisms down, it's also pretty obvious that he isn't the actual POTUS. Atamanuik poses for photos with the protesters, including an older lady who jokingly tells him, "You know we hate you, don't you?" But he also meets one particularly honest little girl, who looks up at him and says, "You're a disgrace to the world," before snapping a photo of the Trump look-a-like on her phone.

The President Show made no attempt to pass the clip off as the real deal, but it didn't take long for someone to cleverly crop out the five seconds of footage in which the girl spoke her mind. And when taken out of context, it's pretty easy to at least at first consider that it might be real:

Unsurprisingly, many Twitter users quickly retweeted the clip, praising the girl for her brutal honesty:

But even after the original source of the clip was discovered, people still seemed to find watching it to be cathartic for their Trump-weary souls:

What's not entirely clear, of course, is whether the girl's comment was genuine despite the fact that Atamanuik was clearly impersonating Trump for his show. Did the girl know that he wasn't really the president, but just wanted to speak her piece anyway? Was she also an actor put in place for the bit? Or did she think she was speaking to the real Donald Trump?

In a tweet from his personal Twitter account, Atamanuik addressed the question by saying that, as far as he was concerned, the little girl was entirely sincere — regardless of whether she knew she wasn't really talking to the president.

Either way, it's not entirely surprising to see a clip like this become a social media sensation. Twitter has, after all, become a popular outlet for people around the world to air their disappointment and frustration over Trump and his administration, as well as being a way to mobilize the growing anti-Trump sentiment that has existed pretty much since he first threw his hat into the presidential ring.

One recent example? After the GOP narrowly passed it's Affordable Care Act replacement bill, the American Health Care Act, in the House last week, public outcry over some of the amendment's most controversial elements led to some powerful trending hashtags. According to ABC News, by noon on Friday more than 146,000 people around the world had used the hashtag #IAmAPreexistingCondition to share their health care stories, and to highlight real-life examples of the potential implications of a health care plan that would once again allow insurance companies to charge increased premiums for anyone with complicated health histories.

That in itself is incredibly concerning, but the fact that pretty much anything can be considered a pre-existing condition under the so-called Trumpcare plan is downright scary. According to Business Insider, there are the major health conditions that often resulted in Americans being denied insurance coverage before the ACA — HIV, lupus, Alzheimer's, multiple sclerosis, and cancer, just to name a few, but according to the Kaiser Family Foundation, there are also countless other common conditions that could easily lead to a higher premium under the ACHA, even for people who might consider themselves otherwise healthy. Some examples? Acne, mental illness, asthma, bone fractures, high cholesterol, kidney stones, migraine headaches, being overweight, urinary tract infections, allergies, and even pregnancy.

According to Politico, on Sunday, Health and Human Services Secretary Tom Price defended the plan, arguing that while Obamacare was expensive and had rules that affected what kind of health care Americans could access, the GOP's plan would restore choice and offer lower premiums. He said,

I think it’s absolutely true that the president is fulfilling his promise to the American people and that is to make certain that every single American has access to the kind of coverage that they want for themselves and for their family, not that their government forces them to buy.

Price also said that, despite the fact that the bill would allow states to waive the ACA requirement that insurance companies must charge the same rates to those with pre-existing conditions and without, the focus of the ACHA was flexibility and lower individual cost:

That sounds lovely in theory, and for some Americans (likely those who are younger, wealthier, and lucky enough to be in good health), the ACHA might seem financially beneficial. But for the millions of Americans who may end up with expensive health insurance that doesn't actually meet their needs — or with no health insurance at all — the GOP's attempt to replace Obamacare with Trumpcare isn't at all a welcome move.

Maybe it's no surprise then that a fake clip of a little girl telling "Trump" that he's a disgrace has become so popular. For all the Americans with pre-existing health conditions who are worried about what will happen to their health insurance under the ACHA, that girl might have said exactly what they were thinking.