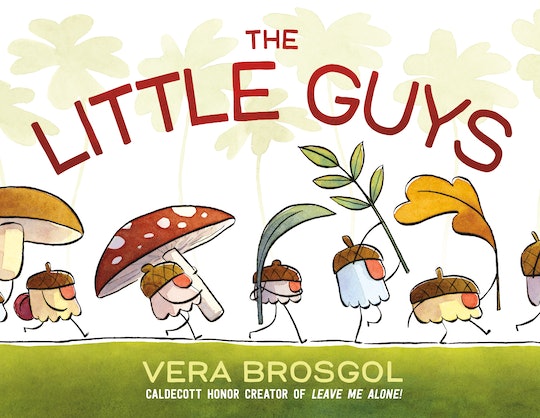 What It's Like To Win A Giant Prize In Children's Literature

It might not mean so much on a wine bottle, but in the literary world, those shiny foil stickers that read "The Caldecott Medal" or "Caldecott Honor Book" means that whatever you have in your hands is quality. When I was a kid, if a book had a medal sticker on it, I picked it up. In 2017, one of the Caldecott Honors was awarded to a debut picture book author/illustrator, Vera Brosgol, for her charmingly grumpy book Leave Me Alone. Leave Me Alone is *highly* relatable for parents. Like, eerily so. An old woman wants to knit in peace, but can’t get the quiet the task demands. Kind of like those times when all you want to do is go to the bathroom without an audience…

Leave Me Alone is also just ridiculously beautiful. Brosgol’s illustrations convey a lot of character and place and emotion. So, yeah, Caldecott Honor. Brosgol is also the author of two graphic novels for the middle grade audience, Anya’s Ghost and Be Prepared. (Pro-tip, both of these graphic novels are rad and so compulsively readable that I downed them both in about an hour and a half.) And now, Brosgol is coming out with her second picture book The Little Guys. Brosgol talked to Romper by phone about her latest outing, giving us all the deets on the inspiration behind the adorable mushroom-gnome-dudes and also about the pressure she’s under for her sophomore picture book.

At first glance, The Little Guys, is all about teamwork and industry. With their little nut heads and beards, their tiny little arms and legs, the eponymous "little guys" look fairly harmless. Dig a little deeper, though, and you find out that the strength that comes with large numbers can also be a tad corrupt.

“I was thinking about large groups and how this sort of hive mentality can take over and how the best intentions can get corrupted, the more power you get,” Brosgol tells Romper. And it’s true for The Little Guys. Sure, they work well together, and they overcome their small stature, but they also start to bully the other creatures in the forest.

That Brosgol started work on this book in 2017 is pretty relevant. “I was watching things that had started out as populist movements grow into bigger, meaner things centered around keeping other people out. And it's hard to live in a capitalist country without observing that long after you have enough for yourself, there is still a push to get more and more, sometimes just so no one else can get it.” But the serious subject matter does not make the book feel heavy. The bullying angle is just a part of this book. Let’s not forget how freaking adorable the guys are. It’s impossible to stay mad at them.

These characters have actually been on Brosgol’s “idea shelf” since she started working on Leave Me Alone. “Originally, the old woman left her village and picked up her house and moved her house into the woods.” Brosgol says. “The place that she landed in the woods seemed like it was unpopulated but it was actually home to these little gnome guys.” When it came time to give the little guys their own book, Brosgol planned the illustrations meticulously. Even though the guys are semi-faceless, she makes sure that the same characters are seen over and over. It’s a fun game to try and track a single gnome through the book. As Brosgol explained, “There’s one that’s smaller than the rest of them, so I kind of enjoyed thinking about ‘Oh. Well he maybe can’t reach as far, so maybe he’s on the top of the pile so that he doesn’t have to have a heavy guy on top of him’ This is what I think about when I’m spending hours staring at a piece of paper. That this imaginary set of lines has feelings and maybe shouldn’t be crushed.”

Brosgol hopes that kids will especially love the little characters. She notes that children are often very interested in things that are smaller than they are. “I think every kid is a little bit fascinated with tiny things. Tiny organisms. Tiny worlds.” And she approached the story with a kid’s-eye view, explaining, “Kids are low to the ground and they see all the bugs and the grass and the dirt and the flowers. They’re spending time there that adults don’t.” Brosgol can remember being fascinated with small things, fondly mentioning Polly Pockets.

The Little Guys, despite sharing its origin with Leave Me Alone, is quite a different kind of book. Brosgol says that she didn’t feel a lot of pressure, even coming off of being awarded the Caldecott Honor. Instead, she felt it was like a “vote of confidence” that she was on the right path. “I also, I didn’t put any pressure on myself to say ‘Now I have to get a medal with this next book.’ The way that I thought about it was like, well, no one gets them two years in a row, so you might as well relax.” While she can certainly see how following up a Caldecott Honor book might be difficult, she also says, “I think you can get pretty frozen if you feel like everyone’s looking. I don’t think everyone’s looking at me.”

I don’t know if I’d agree totally with her. I, for one, am already instantly going to pick up any book she publishes. And The Little Guys has already been proudly displayed among books about fairies, and jars of rocks, and other things in one of my children’s enchanted-forest-themed bedroom. Luckily for all of us, Vera Brosgol is going to continue creating both graphic novels and picture books.

The Little Guys is out April 2 from Roaring Brook Press. And it’s freaking adorable.