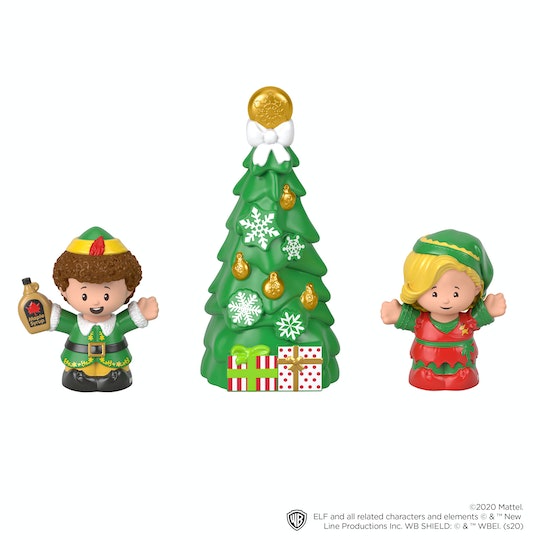 It's safe to say that every parent out there is familiar with the Little People collection from Fisher-Price. The adorable figurines, made with kids as young as 6 months in mind, had their start back in 1950, and have only improved since then. There are tons of different varieties out there, but I personally now have a new favorite: the Fisher-Price Little People Elf collection. It's launching this month, and it's definitely going to be on every kid's Christmas wish list.

What I really love about this set is how it can appeal to holiday lovers everywhere, not just those who love the movie Elf (you absolutely know the one: Will Ferrell as a grown elf living in New York City after he left the North Polee). While the Little People Elf collection is absolutely based off the film with figurines who look uncannily like the actors who played them, it could also come off as just another set of holiday characters: two of Santa's tiny helpers and a Christmas tree. And, sure, this is a kid's toy, but if you're a collector of holiday decorations, this could easily be one of them.

The Elf collection couldn't be cuter. The set includes figurines of Buddy the Elf and Jovie, as well as a tiny decorated Christmas tree. It comes in premium packaging that show off the figures in a snow globe with cut-out snowflakes, which are actually a little nod to the paper snowflakes from the film.

If you look closely at the figurines, you'll notice that Buddy the Elf actually looks exactly like Ferrell, down to the curly brown hair and the happy, excited smile. He's also holding a bottle of maple syrup, which, as we know, is one of Buddy's favorite foods and one of the main food groups of elves. Jovie even resembles Zooey Deschane with the little flip in her blonde hair.

The Christmas tree is adorned with gold ornaments and pretty white snowflakes, with little presents underneath. It's the cutest set, and it's one you'll definitely want to use as a stocking stuffer or just a small gift for the little one in your life.

According to Fisher-Price, this set is safe for kids as young as 1-year-old, so feel free to buy this for your toddler. Babies absolutely adore these little guys because they're so easy to hold and play with. And the best thing is that they grow with kids as well — they're fun for babies, and they're also fun for older toddlers and older kids. They're super versatile and make for a really great collection. Maybe your kids will make collecting these one of their hobbies (if they haven't already).

These toys are available to be purchased now, so if you're more than ready to get into the holiday spirit (even if Halloween hasn't even arrived yet — I don't judge), you can pick these up as a little treat.