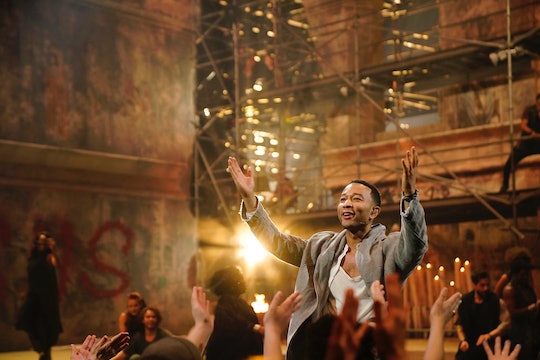 The set of Jesus Christ Superstar Live! on NBC was so expansive that it really added to the impact of the show. It allowed the large cast to be on stage all at the same time without being crowded, and it gave the massive set pieces plenty of space so they could dominate the stage. It may have left fans curious as to where it was filmed, because the location of Jesus Christ Superstar Live! provided the perfect setting to an unforgettable production.

According to Playbill, the concert-style musical was filmed in front of a live audience at Williamsburg's Marcy Armory. Not For Tourists describes the Marcy Armory as a military facility that "often houses film shoots," which means lending its building to the production of Jesus Christ Superstar Live! isn't out of the norm at all. Its 60,000 square-foot space was ideal for the show since it meant the entire audience could fit as well as the very sizable stage, plus the scaffolding and stone walls that made up the interactive backdrop.

It seemed like fans on Twitter responded to the location as well. Its sheer size was impressive, but not distracting. It enhanced the action without taking away from it and gave everyone involved a pretty vast stage to play on — while keeping the cast and musicians from getting lost in the space, too. Using the Marcy Armory struck the perfect balance.

The creativity of the staging makes sense when you find out who is helming the project. David Leveaux handled the stage show, and he's been nominated for five Tony Awards before. He's definitely got the theater chops to pull off a production like this, and he was the one who set the tone for the show. Ahead of the premiere, Variety reported Leveaux saying at a press event that Jesus Christ Superstar Live! was meant to be a true rock opera, and the location did add to the grandeur. He discussed a portion of its staging, saying:

There is a two-foot difference between the mosh pit and the stage. When you are standing there, you are really in the thick of it. It's another (unpredictable) element which is why I use the word 'reckless' in a good sense.

Meanwhile, Alex Rudzinski was the director for the telecast. He was equally prepared for the role due to having directed the television musical Grease Live!, for which he won two Emmy Awards: one for Outstanding Directing for a Variety Special and another for Outstanding Special Class Program. He knows all about translating a show for a TV audience, and Grease Live! also featured unusual staging in that the cast and camera traveled all around from set to set.

Variety reported Rudzinski as saying his goal was to "blend the audience and primary performance area so the demarcation is slightly blurred." Both he and Leveaux wanted the musical aspect to be as visceral as possible, with Leveaux adding that there was "a beautiful, disciplined madness in the whole creation." The Marcy Armory gave them the square footage to allow for things to get a little wild while also remaining in control of the action.

The filming location for Jesus Christ Superstar Live! was just one part of the whole, but it was an important one. A suitable setting helps determine some of how a show looks and feels, and this set fit the vibe of this specific production. The audience on Twitter was taken with the everything Leveaux and Rudzinski decided to do, so it seems like the Marcy Armory ended up being the right choice. It added to the spectacle of a pretty spectacular show.