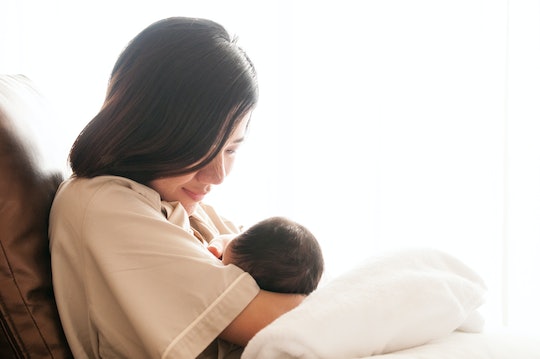 Breastfeeding can take a toll on your body. Although it has a multitude of benefits for both moms and babies, wondering about the lasting effects of breastfeeding on your body can cause some moms to worry. Of course, breastfeeding has many positive effects on women's bodies, but when it gets down to it, there's no shame in admitting that many women are worried about how it will affect their boobs later in life. Learning about the long term effects breastfeeding has on your breasts can help put your mind at ease, or at least bring some clarity to exactly how your boobies will change when you lactate.

Whether you're "well endowed" to begin with or your boobs are on the smaller side, breastfeeding certainly changes the appearance of your breasts when you start nursing. But once you're finished breastfeeding, what's to become of your post-nursing boobs? As it turns out, breastfeeding itself isn't what causes the changes to your breasts in the first place.

It's common for women to worry about their breasts getting much smaller or, heaven forbid, saggy once they're done nursing. And although whoever decided that small or saggy boobs were inherently bad should probably be severely questioned, the concern is widespread. However, according to The Mayo Clinic, current research shows that breastfeeding doesn't "negatively affect breast shape or volume." In fact, one study from the National Institutes of Health found very little conclusive evidence to either support or refute the belief that breastfeeding negatively affects the appearance of your boobs.

In an interview with Romper, Sarah Lester, IBCLC and owner of Naturally the Best Lactation Services, says that pregnancy is the true culprit for the changes in a woman's breasts, as are genetics and good old aging. In fact, Lester tells Romper that, "elastin and collagen production in the breasts vary by age of woman, weight gain during pregnancy, and genetics, but the collagen production is actually stimulated more for a breastfeeding mother."

So although the aftermath of breastfeeding itself won't cause your boobs to sag or shrink, per se, but pregnancy may. It's different for every women, just like each pregnancy and breastfeeding experience is different.

Furthermore, researchers are finding that women who breastfeed may actually have healthier breasts than those who don't. It's widely known that breastfeeding reduces your risk of developing breast cancer in the future. According to the MD Anderson Cancer Center at the University of Texas, breastfeeding limits women's lifetime exposure to estrogen which has been shown to increase risk of breast cancer.

Similarly, breastfeeding can also have a positive effect on the longterm health of the skin on your breasts. An article from Cure Joy noted that breastfeeding stimulates hormones which keep your skin healthy and improves elasticity and collagen, instead of deteriorating its condition.

So although many women report that their post-nursing boobs are smaller than they were before or maybe a tad bit saggier, genetics, aging, and pregnancy are the true culprits. Breastfeeding isn't to blame.