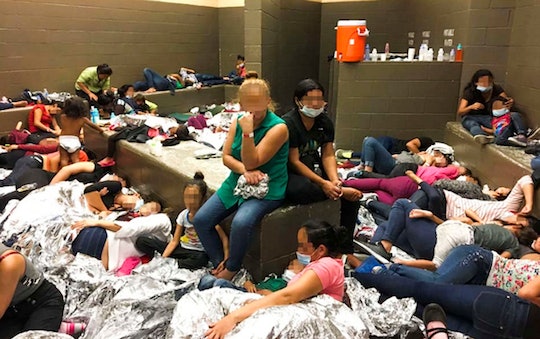 By now, you've heard the allegations that children in detention facilities at the border are not being adequately cared for or provided with essential hygiene products. From the attorneys who reported appalling conditions to Associated Press reporters after their visit to a Clint, Texas, facility to, most recently, U.S. Representative Alexandria Ocasio-Cortez's account of people being told to drink out of toilets, reports and photos of what is taking place are gut-wrenching. But it's important to dig in, no matter how uncomfortable it makes you, in order to understand the lasting impact these conditions will have on every single person being exposed to them — especially the children — if we don't demand an end to it.

How the U.S. government is treating these children is not just abhorrent; it has been deemed torture by those who have seen it first-hand. Dr. Dolly Lucio Sevier — a physician who was called to the Ursula detention center in McAllen, Texas, after lawyers reported a flu outbreak amongst infants there — said in a medical declaration obtained by ABC News, "The conditions within which they are held could be compared to torture facilities."

During the most important developmental stage of their lives, denying children of basic needs — their families, healthy food, uninterrupted sleep, and proper hygiene — even in the short term, can cause them irreparable harm. And, as we've seen, this neglect at the border can also lead to death (at least seven children have died while in Customs & Border Protection custody this year, according to the ACLU).

While the foremost concern is reuniting children with their families, the recent allegations bring up a multitude of issues that need to be addressed. The serious health risks of poor oral hygiene are just one of these important topics that could easily be overlooked in this discussion.

It's Not Just The Toothbrushes

Context is crucial if you want to understand the broader issues at play. Dr. Mark L. Cannon, a pediatric dentist, professor, and lecturer, explains that the healthcare systems in the countries these families and children are fleeing from are nowhere near the level of what we have in this country. Many migrants are in poor health already when they arrive at the border. "Then you get to oral health," he continues, "which is even worse. Over half of the children coming in have never seen a dentist." Which means, of course, they're at a much higher risk for dental caries (tooth decay) already.

Hygiene is one way that we solidify for our children the importance of self-compassion and self-care.

These children are then sitting in detention facilities with virtually no one taking care of them aside from the other children, according to the attorneys who visited the center in Clint, Texas. The longer they wait there, unaccompanied and uncared for by their families or medical professionals, the worse their problems become.

Not being able to brush your teeth, or not knowing how to properly do so impacts so much more than just your mouth. Dr. Cannon cites research that points to gum disease being linked to the development of Alzheimer's, as well as studies that have shown pediatric dental issues can lead to heart disease later in life.

The Children's Dental Health Project cites a study done in North Carolina that shows children with poor oral health were nearly three times more likely to miss school as a result of dental pain. Dental issues can also lead to lower grades in teens and fewer job opportunities in adulthood, according to a CNBC report shared on The Daily Beast that highlights how employers can make instant judgments based on appearance, including someone's smile and teeth.

The Link Between Hygiene & Self-Esteem

And then there's the damage taking place that can't necessarily be seen. Dr. Lori Baudino, a clinical psychologist who works with children and families, states, "Hygiene is one way that we solidify for our children the importance of self-compassion and self-care."

Think about it, when you teach your children how to properly care for their teeth, no matter how much they may fight you on it, you're helping them gain independence, teaching them the importance of prioritizing their health and well-being, as well as instilling a routine of care. All of these things, Baudino notes, lead to how we care for and nurture ourselves long-term.

Baudino also explained, "A child with poor oral hygiene will have less comfort communicating verbally, or smiling and engaging with people." Which, of course, ultimately leads to more isolation for these children, who have already been separated from their loved ones.

What The Government Is Saying

There's a complex system of agencies and laws in our country that handle immigration and border patrol, including Immigration and Customs Enforcement (ICE), The Department of Heath and Human Services (HHS), The Office of Refugee Resettlement (ORR) and the United States Customs and Border Protection Agency (CBP). When people first cross over the border without the proper documentation, such as those seeking asylum, they are detained and processed by CBP before being transferred to the other agencies.

CBP, according to its website, "is one of the world's largest law enforcement organizations and is charged with keeping terrorists and their weapons out of the U.S. while facilitating lawful international travel and trade."

Why this agency is handling the care of small children is a topic for another day, but ultimately, this is the agency that oversees detention facilities such as the one in Clint where the attorneys reported the neglect.

When contacted for a statement, CBP sent back a transcript of a media call held on June 25 between a CBP official and a reporter. There's a lot to cover in the nine-page transcript, but in part the official explains that, "We completely agree with some of the reporting that has gone out that UACs (unaccompanied minors) should not be held in our custody. We do not want them are [sic] in our custody our facilities were not designed for that. We have short-term holding facilities... "

In other words, these particular facilities where children are being detained for long periods of time were not designed to house and care for anyone, much less babies and children.

On July 1, President Donald Trump signed a bill providing $4.6 billion worth of funding to the U.S./Mexico border, according to a report by UPI. Nearly $3 billion of that is supposed to provide humanitarian aid and increased security measures. What that ultimately means for the children in crisis is unclear.

What we know for sure is this: Thousands of unaccompanied minors are in our country right now, seeking asylum from their home countries where war, poverty, and sexual abuse/trafficking offer them little hope for the future. They do not need to be in detention centers period, much less alone. They need to be with their families or sponsors who can care for them while they await asylum hearings.

And wherever they are, they should, at the very least, be able to properly take care of their bodies. A toothbrush is just one of too many examples of things they shouldn't be without. One has to wonder: How good of a country can we really be if we're comfortable denying these basic necessities?

As Dr. Baudino notes, "The simple act of being able to take care of their teeth can support the connection these kids so desperately need, to themselves and one another." Yes, there is so much more that needs to be done to treat these children like humans, but it's a start.

More Like This
Two Young Children Have Been Hospitalized Because Their Formula Is Out Of Stock
Spain Could Offer Up To 5 Days Of Menstrual Leave A Month & It'd Be A Game Changer
13 Moving Photos Of Kids, Families, & More Protesting Abortion Rights Across The Country
From Captions To Gifts, These Are All The Kindergarten Graduation Ideas You Need