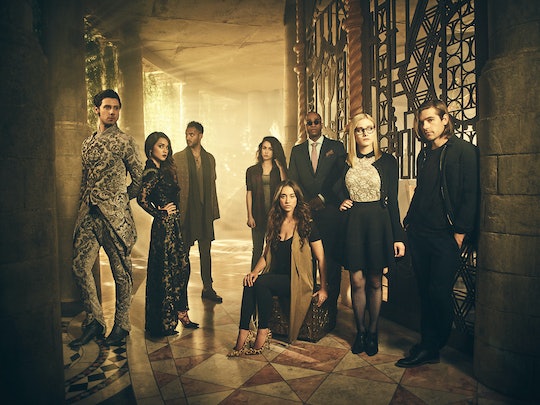 Enchanting Spoilers About 'The Magicians' Season 2

If you love immersing yourself in a world of fantasy and non-stop action, then odds are you're probably obsessed with the fantastical Syfy series The Magicians, which is gearing up to debut its sophomore season on Jan. 25. It's Narnia meets Harry Potter with a much darker, sexier Game of Thrones-ish tone that finds the students of Brakebills attempting to save Fillory (and themselves) from the Beast's grasp — all while trying to harness and nurture their ever-growing magical abilities. And since Season 1 ended on such a major cliffhanger — with Julia teaming up with the Beast to get revenge on Reynard — viewers are undoubtedly eager to see what will happen next. Luckily, I've managed to acquire some Season 2 spoilers from The Magicians cast, who were more than eager to dish on what awaits our favorite magicians when the show returns.

As the trailer clearly indicates, the gang does end up recovering from the close encounter with the Beast (aka Martin Chatwin), but according to the cast, their troubles have only just begun. "[Quentin] starts off right where the audience is, really not knowing what's going to happen to all these people who are dying around him," Jason Ralph reveals to Romper. "So we start off with him struggling to figure out how to solve this problem." That means viewers can expect to pick up right where Season 1's finale left off. And if you thought that latest showdown with the Beast was intense, Ralph assures fans that battle "is the prelude to where this goes in the end."

But will that battle also involve going up against Quentin's BFF, Julia? At the end of the first season, Julia betrayed the group by offering the Beast a deal: she'd allow him to live (for the time being), but only if he helps her get revenge on Reynard. And while your initial instinct may be to resent Julia's decision, Stella Maeve (who plays Julia) hopes fans will be able to sympathize with her decision. "I would like to think that her intentions are good when it comes to the group and especially when it comes to Quentin, who she loves," Maeve explains, adding:

I don't think she has malicious intent. I don't think she meant to, sort of, betray the group. I think in her mind, it was like 'OK, the Beast is about to kill Quentin. I have a tool, the knife, the dagger, the blade, to stop him. I can save Quentin and whoever else may or may not be alive and also make a deal with the devil, so to speak, to help my own situation, so this is perfect.'

And the dynamic that will form between Julia and the Beast will be a very interesting addition to the season, and perhaps even make viewers question their feelings for Fillory's big bad foe. "You find these two characters that you come to realize in Season 2 both have a lot of commonalities and maybe it's not it's not black and white," says Maeve. "Maybe it's not good vs. evil. Maybe people aren't so ordinary. That there are a lot of layers and just because you make some bad decisions doesn't categorize you as a bad person."

The Beast, however, isn't the only nemesis out there. Reynard is still at large and will continue to be a great threat in Season 2 for both Julia and Kady, the latter of which is still reeling from guilt over what happened to Julia. "There's definitely guilt for having left her friend," Jade Tailor, who plays Kady, admits. "There's a lot of vulnerability and depth to her this year." And hey, maybe part of that will include finally reuniting with Penny after all this time? Please?

Speaking of Penny, he could certainly use an extra hand or two these days. (Sorry, I had to.) Penny has now had both of his hands cut off courtesy of the Beast, which will put this usually self-sufficient character in a very uncomfortable position. "He doesn't like to rely on people, he doesn't like to be in a group," says Arjun Gupta, who plays Penny. "You lose your hands, there's very little you can do by yourself." And don't let the promos for Season 2 fool you. Because even though it seems like Penny does manage to get his hands back, as Gupta puts it, "there's always a price to pay."

And as for Dean Fogg, Rick Worthy wants fans to know that "we'll see him regaining more of his control and more of his power as a magician." Which is a good thing since the magical world is going to need his help now more than ever. Because as his character mentions in the trailer, if magic disappears in Fillory, it disappears everywhere.

One of the key differences between Season 1 and Season 2 is that a major portion of this year will take place within Fillory itself, which is where Eliot and Margo will truly get to shine now that they are High King and Queen of Fillory. Though, it will prove to be an uphill battle. "I think he's in over his head," Hale Appleman shares about Eliot's journey into the royal ranks. "As a person who's rewritten his history, he doesn't really want to let go of it and start over again and he has to. So this season is kind of about confronting that and taking responsibility." And part of that responsibility involves being married, which will be something Appleman says Eliot will continue to struggle with: "He comes to a kind of love and respect for [Fen], but it's definitely not instant and certainly not all that he craves."

But when it comes to Margo's reign, Summer Bishil assures fans that her character was born to wear a crown. "She becomes High Queen and she's really good it," Bishil states. "She's much more multi-dimensional this year." So don't expect every scene of hers to involve Eliot. Margo is much more independent this season and gets an interesting storyline that's completely separate from the group. "There is a moment she has with a young man in Fillory that does not go to her liking," Bishil teases. "There's consequences."

Suffice to say, it's going to be another magical season of epic proportions and lead to some very jaw-dropping moments. "The choices our characters have to make are getting more difficult as this season progresses and the show's just a lot bigger this year," says Olivia Taylor Dudley, who plays Alice. "Now we get to actually take what we've learned and have to go try to survive in a really dangerous landscape." But whether or not all of them will be able to succeed at surviving is another story, and a question that the cast was unable to answer. Let's just hope for the best, shall we? (Gulp.)