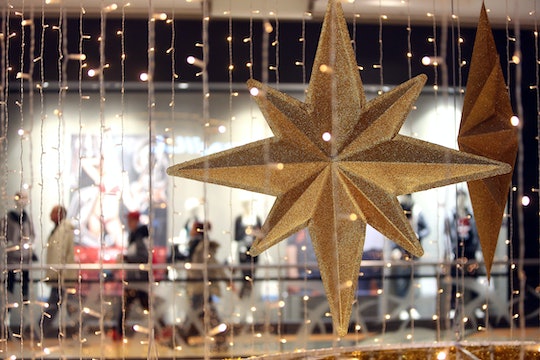 The weeks leading up to Christmas are a time when shopping malls are generally completely packed, both with people looking to find gifts for their loved ones as well as families lining up to let their kids take pictures with the local mall Santa. Usually those photos include on older, white man with a beard and a red suit, but this year, the Mall of America hired a black Santa for the first time since it opened 24 years ago, which is not only super cool, but something that is entirely overdue.

According to The Minneapolis Star Tribune, retired U.S. Army veteran Larry Jefferson will be heading to the country's largest mall for four days as part of it's appointment-only Santa Experience, taking a short break from his usual stint as Santa back in Dallas, Texas, where he lives. Unfortunately, appointments with Jefferson — aka "Santa Larry" — are now fully booked, but the demand could mean that other malls around the country could finally start hiring black Santas of their own. Landon Luther, who co-owns the mall's Santa Experience, told the paper that having a black Santa was "a long time coming," and said "we want Santa to be for everyone, period.”

Despite the attention, Jefferson told WCCO Minneapolis that he didn't consider what he was doing to be particularly special. He told the local news station that “It’s no big deal," and explained, "I’m still Santa, I just happen to be a Santa of Color." As for the children he sees, Jefferson told The Star Tribune that most of them don't even seem to notice the difference in his skin color, and that “what they see most of the time is this red suit and candy ... I’m just a messenger to bring hope, love and peace to girls and boys.”

For many parents and children though, having a black Santa at their local mall really is a big deal. For a lot of kids, meeting Jefferson is likely the only time they've ever seen a Santa that actually looks like them, and there's no question that all children can benefit from realizing that Santa doesn't have to just be white by default. As Shanene Herbert, director of Project SPIRIT, an after-school program for black children in St. Paul Public Schools, explained to The Star Tribune, “Kids only see one image of Santa. Even though he’s a fictional character, he could be any color, any race, any gender. This is an image of him too.”

Jefferson told WCCO Minneapolis that he does occasionally see children who are taken aback by his skin color, but that even then, kids rarely seem to question it. He said,

Just Saturday, I was doing an event, and one child said, ‘Santa, you’re brown,’ and I said, ‘Yes, I am, but Santa comes in many different colors.’ He said, ‘Oh,’ so I gave him a candy cane, he ran off with other kids.

According to The Washington Post, Jefferson was recruited for the Mall of America job while attending a convention for professional Santas in Missouri in July. Although more than 800 people attended the convention, Jefferson was the only black Santa there. Luther had sent one of his regular Santas to the convention with the intention of bringing more diverse Santas on board at the Santa Experience, and when he met Jefferson, he seemed like the perfect choice.

Despite the attention he has received recently as a result of his new gig, Jefferson has actually been a professional Santa since 1999 — though he told The Star Tribune he'd been playing Santa informally for family and friends even since he was 12 years old. Beyond simply being something he does to pay the bills, Jefferson told The Washington Post he looked at his work as "a calling," and even answers his phone as Santa Claus. But he did admit that being a black Santa can also be a difficult gig: Jefferson said he's experienced a lot of rejection from employers, many of whom just aren't looking to hire Santas who aren't white.

Although he may have been the only black Santa at his convention, Jefferson certainly isn't the only non-white Santa. In Texas, where Jefferson normally works, black Santas pop up in various cities, and while he is still the only black member of the non-profit group Lone Star Santas, the group does have "around six Hispanic Santas and at least two Jewish members," according to The Star Tribune.

Hopefully this is the first move of many to get rid of the outdated notion of Santa specifically being a white man. It won't change overnight, but given that the country's biggest mall brought in a black Santa and found it to be an overwhelming success, it will hopefully send the message that there is absolutely a demand for greater diversity. And that's something that will be a great development for pretty much everyone.