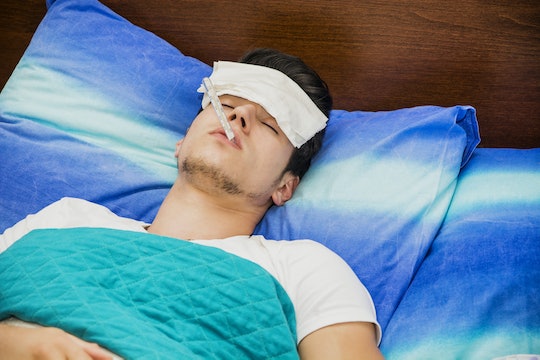 The “Man Flu” Might Actually Be Real, According To Science

The idea of the “man flu” is a trope that gets plenty of action this time of year. Most of us have heard of it or have seen some real-examples: a man and a woman both get hit with an incredibly nasty cold or flu virus. The woman may take medication or other remedies to help her ward off the effects of the bug, but keeps going with life (and if she’s a mom, that means probably keeping up with the kids’ schedules, family needs, and the other never-ending tasks on her list). The mega cold plays out far worse for the man, though; his sniffles, aches, and fever seem almost exaggerated, making life downright unbearable. And the stereotype suggests that the guy is making his symptoms seem more pathetic to get sympathy (or some quality time with a fluffy pillow and Netflix). But could he genuinely be suffering from a more severe set of symptoms? A new study suggests that the “man flu” might actually be real because of a legitimate, evolutionary difference between male and female sex hormones.

There’s plenty to unpack in the above scenario, especially around how men and women prioritize and practice self-care. I’ll be the first to admit that my husband is better at identifying when his body needs him to slow down and rest up for a full recovery. But the idea of the man flu is about more than whether men are less likely to “power through” when they’re ill.

Some have argued that the old stereotype (complete with calls for more medicine and soup) is based in the reality that men actually feel the symptoms of illness more acutely. According to the findings from a new Canadian study published this month, there is evidence that men get sicker than women when it comes to the common cold, influenza, or other respiratory infections.

For the study, Dr. Kyle Sue of the Memorial University of Newfoundland examined existing medical data and research on biological differences in the severity of cold and flu symptoms.

Sue’s research was published in the special Christmas edition of The BMJ, formerly known as The British Medical Journal. That edition is known for putting out “slightly more fun than usual” research studies, according to Slate. That might account for its tongue-in-cheek examination of “whether men are wimps or just immunologically inferior.”

In his article, Sue points out earlier research showing that increased testosterone might suppress the human immune system, making men less responsive to the flu vaccine and more likely to experience complications from bronchitis and other respiratory illnesses. By contrast, higher estrogen levels were associated with a stronger immune response, Sue wrote.

The concept of man flu, as commonly defined, is potentially unjust. Men may not be exaggerating symptoms but have weaker immune responses to viral respiratory viruses, leading to greater morbidity and mortality than seen in women.

But hormone levels are just one of many differences that might account for the flu disparity between the sexes. Slate reported that certain lifestyle decisions may offer women an advantage (or give men a stronger disadvantage) in recovering from viral infections. For starters, men are less likely to see a doctor (which could also lessen the odds that they get vaccinated for flu in time for it to be effective). According to Harvard Men’s Health Watch, men are also more likely to engage in a number of social behaviors that lead to weaker health — including smoking, drinking, a poor diet, and aggressive behaviors.

According to Sue’s study, those same social behaviors offer a clue into whether the “man flu” serves an evolutionary purpose. I mean, what would be the benefit of nearly 50 percent of a species having a weaker immune system? Sue suggests that the benefit that increased testosterone offers men (in terms of sexual development and muscle strength) outweighs the cost of potential death from infection.

In other words, men might be naturally designed to “live hard and die young.”

Still, the research doesn’t necessarily mean that we should assume that men are actually suffering more — or more deserving of being pampered — when they’re ill, CNN reported. Sue’s report is the first of its kind, but there are more aspects of the “flu disparity” that researchers have yet to unpack, including whether the so-called "sickness gap" is affected by bias in women's access to health care and how they're treated by medical professionals. Are doctors more likely to sympathize with men's symptoms than women's — and treat those symptoms as if they are more severe?

For now, though, the best course is for men and women to just take care of themselves at the first signs of illness, health experts told CNN. Most symptoms of a cold or flu will pass after a few days of painkillers, fluid, and rest — no matter what sex you are.