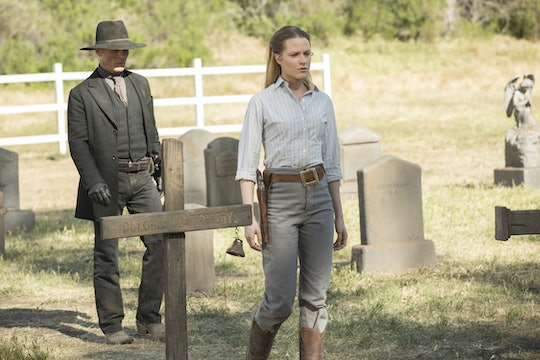 The Westworld Season 1 finale left a few huge questions to be answered in spite of all that's happened this season. One of the storylines it satisfyingly tied up for fans was the question of who the Man in Black really was. It turns out the Man in Black is William on Westworld. Fans had already sussed this out for the most part, with many theorizing that the Man in Black must be either William or Logan and that the series was taking place on several timelines.

It turns out that, after Logan throws Dolores to the army soldiers while William is tied up, William finally snaps. He kills all the hosts in the vicinity, and travels with Logan to the outer edges of the park in search of Dolores. He kills many more hosts along the way, and finally realizes his true nature. We learn that Logan is the would-be heir to Westworld, because his father owns Delos. William sends him out of the park naked and strapped to a horse, with the intent of humiliating him before his father and taking over Delos himself. That way, William will eventually own the park as a stakeholder. William spends the next chunk of time searching for Dolores after the horrors she endured at the hands of the army soldiers, but, by the time he finds her again, she's been rolled back and doesn't remember him, or have as strong access to her memories as she was beginning to have with William.

He becomes enraged by this and realizing it is what causes him to snap into monster mode. Dolores no longer means anything to him, because he realizes she's just another host. The one thing William/The Man In Black still doesn't understand, however, is that Dolores is Wyatt and the center of the maze is a place for the hosts to gain consciousness as Bernard designed it for them — not a deeper level of the game for guests. Although, once the hosts become conscious, they would be able to fight guests, making the game more "real," as the Man in Black would like it.

The Man in Black tells Dolores, who is still waiting for William to come rescue her, this story and she realizes that the monster she's been running from has been her William all along. In a fit of rage, she does begin to fight with the Man in Black, and actually gets pretty far along in her beatdown. But just before she works up the courage to pull the trigger, the Man in Black is able to stab her. So William lives on and Dolores undergoes yet another rebuild.