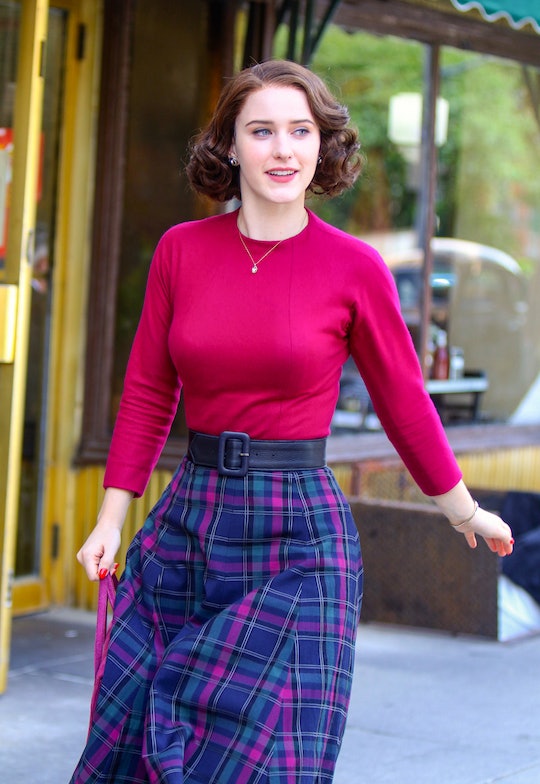 'The Marvelous Mrs. Maisel' Season 4 Has Been Confirmed (Yes!) But Hang Tight

If you're dying to know what's next for housewife-turned-standup comic Midge, grab your martinis because Season 4 of The Marvelous Mrs. Maisel is on its way. Yet again, Amazon's hit show has racked up an impressive 20 Emmy nominations in 2020. Along with its third consecutive nod for outstanding comedy series, the show received seven nominations for its actors, and nominations for best directors as well.

Unfortunately, the coronavirus pandemic has put Mrs. Maisel — like most shows these days — in a sort of production limbo. Amazon announced the show's renewal on Dec. 12, but things have been up in the air since then. Following the news of Season 4, the husband and wife showrunners Amy Sherman-Palladino and Daniel Palladino told The Hollywood Reporter that they are psyched to get back to work.

"We were thrilled to hear that for the fourth time, we do not have to pack up and vacate the premises," they told the magazine. "We'd like to thank Amazon for all their faith and support, their partnership and enthusiasm and for letting us hang with our favorite people, the cast and crew of Maisel, for a little while longer."

The entire cast is set to return for the new series, whenever the time comes. Multiple sources have speculated that the fourth season will premiere early this December, considering past seasons have been released at that time, according to Women's Health. However, as of August the directors were still working to get the show going amidst the pandemic.

"We're scared to death, and we don't quite know what to do," Palladino told The Hollywood Reporter. "We're all kind of in the same boat. I think it's going to be very, very daunting. We know what happens in season four — we could write it, but none of us really knows when we're going to be producing these things. We're all just sort of crossing our fingers and hoping for the best."

Season 3 left lead character Midge facing a professional setback that fans of the show likely remember and the showrunners apparently plan to pick up right where they left off.

Hopefully more information will be released about the new season in the coming months. But in the meantime, fans can catch up with the show's stars and track their awards at the Emmys on Sunday, Sep. 20 when the awards show airs from 8 p.m. to 11 p.m. ET on ABC, YouTube TV, and Hulu + Live TV.