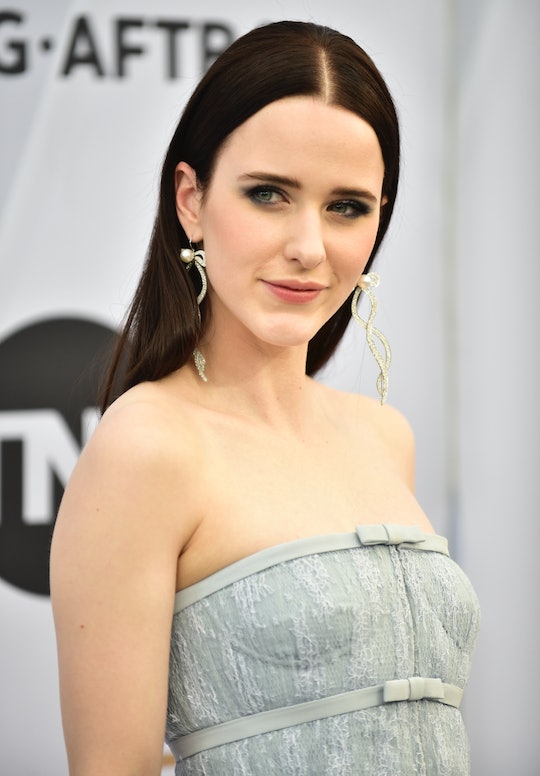 The world's really in love with Rachel Brosnahan right now. Fresh off her SAG win for best female actor in a comedy series, The Marvelous Mrs. Maisel's Rachel Brosnahan is paying tribute to her late aunt, Kate Spade, by appearing as the face of Frances Valentine's spring collection.

Frances Valentine is the new brand Spade launched in 2016, according to PopSugar, with HuffPost adding that the fashion line, a collaboration with Spade's husband, Andy, was named after the couple's daughter.

Spade's suicide last year was deeply shocking to the designer's many fans the world over, as HuffPost added, but niece Brosnahan has been able to channel her grief into a tribute.

"I don’t believe the search for ways to commemorate, to honor, and to keep someone you love’s memory alive ever ends, but I’m so grateful for this collaboration,” the actress said on Instagram in announcing the news, which finds her modeling the line's spring fashions in vivid colors including orange, yellow, and green.

"Spring was Katy’s favorite season. This collection is a celebration of her life, her spirit, her legacy, and her love of a good color pop (or six). She was a force of nature and a heck of a good time," Brosnahan added in her post.

"I think when you lose someone you love very, very much, you spend a lot of time trying to think about how to keep their spirit alive, how they can live on for you, and that’s through memories,” Brosnahan elaborated on the Today show.

"In Katy’s case, there is so much of her left behind, and this was an opportunity for us to celebrate her life and her legacy and how much she meant not only to us, but to so many other people and the impact that she’s had on the fashion industry. It was a really special experience and the collection is just beautiful," the star added to Today's Hoda Kotb.

After Spade's death last year last June, Brosnahan posted family video footage of Kate, writing that "she had a light that words can’t capture but touched everyone she came into contact with. She was exceedingly kind, beautifully sensitive, insanely talented, funny as heck, and one of the most generous people I have ever known. She was effervescent. Hug your loved ones extra tight today."

Now that Spade's last passion project is becoming better-known, there are bound to be comparison between the Frances Valentine line and the Kate Spade collection, whose handbags seem to dominate in certain professional industries.

But as Brosnahan explained on Today, the family's love of vintage was the inspiration for Spade's renewed zest for design. (The designer stepped away from her namesake collection in 2006, and it was sold to Coach in 2017, according to Forbes.)

Brosnahan thinks that this line encapsulates her aunt's sense of style and creativity. "I know that Kate always talked about being inspired by my grandmother June, her mother, ripping things straight out of her closet," Brosnahan noted on Today. "And I feel like that spirit still lives on as well, so it’s really lovely to see those special pieces of our family be reflected through this collection and the ones before."

Prior to her death, Spade had christened one of Frances Valentine purses "the Midge," as a tribute to Brosnahan's character's nickname. You can see all the new designs on the company's website, but it's nice to know that Spade's artistry is being given a new spin and her design ethic is being nurtured even after her passing.