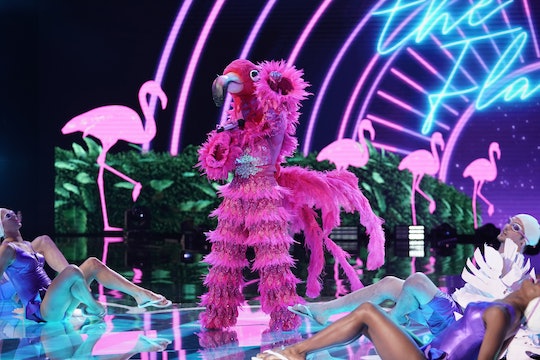 The Masked Singer is back this fall after its wildly successful debut earlier this year, and The Masked Singer Season 2 predictions are already rolling in. TMS Twitter is ready to defend its guesses till the bitter end and clues revealed in sneak preview clips are only fueling the fire. Of course, host Nick Cannon narrates all the grueling work that went into building each disguise, with seemingly every one of them earning the designation "one of the most complicated costumes on the show." Fans are fervently trying to piece together the clues to form some educated guesses about this season. Basically everyone clocked Johnny Weir — the first contestant to be eliminated — as The Egg, so viewers are doing pretty well so far. The Ice Cream was also revealed to be YouTuber Ninja, so that leaves 14 contestants still in the running this season.

The Masked Singer returns on an even bigger scale for Season 2, with 16 competitors in the running instead of last season's 12. T-Pain won Season 1, with Donny Osmond as his runner-up and Gladys Knight coming in third. Professional singers clearly have the edge in terms of competing, but they're also the easiest identities to predict, especially if they're particularly talented. Regardless of how Season 2 fares, The Masked Singer has already been renewed for Season 3, which is slated to premiere after Super Bowl LIV in February, according to The Hollywood Reporter. Here are The Masked Singer fans' best guesses as to who some of the Season 2 contestants might be.