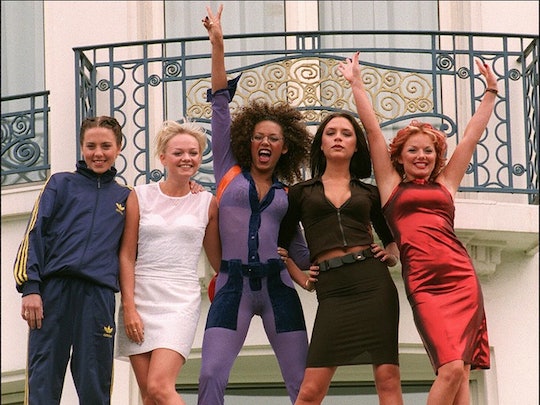 The Meaning Behind Spice Girls "Wannabe" Lyrics Aren't At All Surprising, If They're True

It's been 19 years, and "Wannabe" by the Spice Girls is still a Very Important Song that we should be talking about constantly. And "a source" is indeed talking about it, to The Daily Star. It seems that someone just couldn't keep a secret any longer, and revealed the possible hidden meaning behind some of the lyrics to "Wannabe." The anonymous source identified himself as a co-writer of the mega hit (for what it's worth, the composers are credited as the Spice Girls themselves, Matt Rowe, and Richard Stannard, so that narrows the anonymous source down a bit).

So what's so sinister about "Wannabe"? It all goes down in Mel B.'s rapped introduction of the group. "We got Em in the place who likes it in your face..." OK, that's a pretty straightforward and inoffensive characterization of Emma Bunton. "You got G like MC who likes it on an... Easy V doesn't come for free..." "Easy V" is, of course, Victoria Beckham. But G and MC – Geri Haliwell and Melanie Chisholm – like it on a what now? That was never clear, until now. (Kinda.)

According to the Star's source, it's all about the placement of that "E" in "Easy V." Kind of like when you sing that schoolyard song about Miss Suzie going to Heaven and her steamboat going to "hell ... oh, operator." You could swear without really swearing. Supposedly, Scary was trying to sneak in a reference to ecstasy, saying tat Ginger and Sporty like to mix their sex with drugs. Ooh, controversial!

Honestly, though, who cares if they did? I'm an older Spice Girls fan, closer in age to the Girls themselves than their core audience (a fact I fully realized when I was the only fan at the reunion concert who could buy beer), so let me school you about what the big kids were doing in the mid-'90s: ecstasy. It happened. This really doesn't change the song for me at all, and I don't see why anyone should feel differently knowing that a couple of women who were known for wearing near-10-inch platform shoes may have made another sketchy choice two decades ago.

Just one more bombshell for you, though. Have you been wondering what "zig-a-zig-ah" means? The truth, if this anonymous source is to be believed, is pretty gross. Apparently, the studio where "Wannabe" was recorded was host to one bad neighbor in particular, an "'80s pop dude" who hated the Spice Girls and company for encroaching on "his turf." The man picked up a nasty habit of stinking up the shared bathroom not only with the usual stuff, but also by smoking cigars while he did his business. So the gang took to calling him "sh*t and cigars," which the source thinks Mel B. subconsciously morphed into "zig-a-zig-ah."

If you ask me, that revelation is a lot more disturbing.

More Like This
Ireland Baldwin Shares Her Abortion Story In An Emotional TikTok
Yellowstone Season 5 Officially Has A Premiere Date
Meghan Markle Calls On Men "To Be Vocal" In The Aftermath Of Roe v. Wade Ending
Chris Pratt Says He "Cried" About That "Healthy Daughter" Instagram Post Controversy