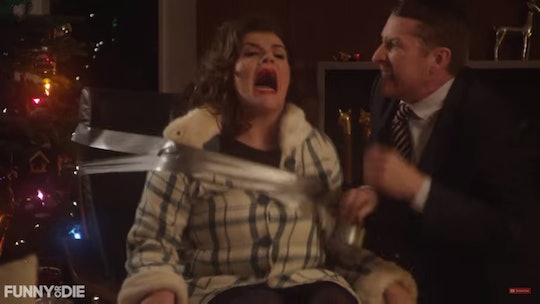 The Meaning Of "Baby, It's Cold Outside" May Not Be About Rape, But It's Still Disturbing

It's Christmastime, which means it's time once again to start debating the meaning of "Baby, It's Cold Outside." Though nobody batted an eye when the song first debuted in the late '40s, the song is pretty creepy when you take a modern look at it. Just in the past few days, we saw "Baby, it's Cold Outside" parodies on Saturday Night Live (with a Cosby twist, because of course they did), and by Scott Aukerman and Casey Wilson for Funny of Die.

For the uninitiated (honestly, I can't see how that's possible), the song is a call-and-response duet, meant to be performed by a woman and a man. The woman repeats, over and over, in every which way, that their date has come to an end and she needs to go home. The man responds to each line with an argument that it's cold outside, she's beautiful, and he really, really wants her to stay. Some of the creepier lines include the man's complaint that his date is "hurting [his] pride" by leaving, and the plea of "How can you do this thing to me?" And of course, the infamous line by the female singer, "Say, what's in this drink?" which nobody can seem to explain away.

"Baby, t's Cold Outside" was written by Frank Loesser, and was regularly performed by the composer along with his wife, Lynn, at parties. The original sheet music referred to the singers not as "Lynn" and "Frank," or even "Singer A" and "Singer B," but as "The Mouse" and "The Wolf," which proves that even Loesser realized that his character was at least a bit of a cad.

But surely Loesser wasn't singing about coercing (and possibly drugging) his wife at Christmas parties, was he? Some fans argue that "Baby, it's Cold Outside" is a feminist anthem; the mouse actually wants to spend the night with the wolf, but societal pressures cause her to demur. Some even believe that she does end up (consensually) staying the night, though the lyrics are unclear about the outcome.

So does the mouse want to stay or go? Consider her phrasing. Nowadays, thankfully, most people understand that no means no. But does she ever actually come out and say no? She "can't stay." She's "got to go 'way." She "oughtta say no, no, no, sir." She expresses concerns about her family worrying, and the neighbors gossiping. She even consents to have another drink and a cigarette.

But only once does she actually say, flat out, that "the answer is no." And again, in 2015, that's that. She said no, and he needs to order her an Uber and thank her for a lovely evening. But in 1944, did no really mean no? Or did it mean "Society won't allow women to own their sexuality, so I'm going to pretend like I'm not DTF, even though I really am?" We may never know.

But I think we can all agree, whether the song the song is about sexual coercion or sexual repression, it's still a product of the patriarchy, a huge bummer, and in no way is it a Christmas song. For that, may I recommend "Christmas Wrapping" by the Waitresses? This one actually does have "a very happy ending."

More Like This
How To Approach The Topic Of Emotional Labor With Your Partner
This Is What Happens To Your Vagina When You Stop Having Sex
How Do I Rediscover My Sexuality When I’m Completely Touched Out?
Mom's TikTok Sparks Debate On Whether It's "Normal" For Babysitters To Sleep On The Job