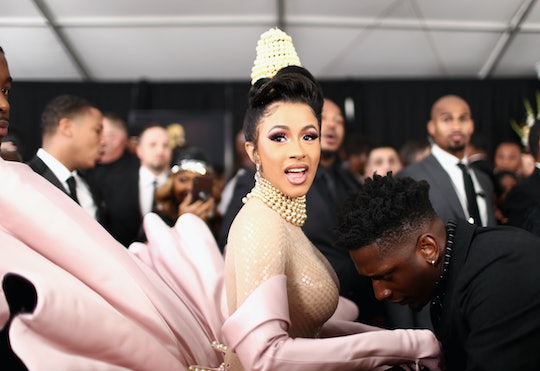 Who Stole The Grammys This Year? The Memes For Cardi B's Grammys Dress

Cardi B is rarely one to hold back, including when it comes to her style choices. Her Grammys look was no exception, and it inspired tons of hilarious comparisons — the memes for Cardi B's Grammys dress were one of the biggest highlights of the show.

Twitter had a lot of thoughts on what exactly Cardi's dress reminded them of, and some of them were just outrageously funny. That's the risk of going high-fashion, I suppose. Vogue noted on Instagram that the look was pure vintage, from Mugler's Fall 1995 Couture collection. The outfit had quite a bit going on, from a mermaid-like black skirt, sequined top, gloves nearly to the shoulder, and strands upon strands of pearls. With five nominations and a performance on top, Cardi didn't need an over-the-top outfit to be the Queen of the Grammys, but I'm so glad she went there.

Cardi B's look may go down as the dress that launched a thousand memes, but of course, it had plenty of fans as well. No matter what she wears, Cardi's many stans will always have her back — but I'm sure even some of them will have to admit she did look a bit like a clam.

Others thought she looked more like an oyster, especially with all those pearls on her neck and in her hair.

In keeping with the under the sea theme, Cardi's look also drew tons of comparisons to Ursula from The Little Mermaid, and once you see it, you can't unsee it. I'm pretty sure she didn't steal her voice from a gullible redhead, though.

Perhaps Cardi B will take over Lady Gaga's spot as the one to watch for absolutely bonkers looks on the red carpet. Please, no meat dress.

Others thought she might have raided her kitchen for some style inspiration.

You really do have to wonder how Cardi could possibly sit down in that dress, because walking was enough of a challenge. The Daily Mail pointed out that the rapper needed five people to help her make her way down the red carpet. I imagine if you fall over in a dress like that, you're not getting up on your own.

Cardi B's look also might have given some people a sudden urge to check whether their local Outback Steakhouse delivered.

Honestly I'd feel way worse about laughing at some of these if Cardi hadn't proven time and time again that she's got an amazing sense of humor. Remember when she told fans speculating about whether she was pregnant that she just wanted to "fat in peace"? (Which turned out to be a lie, of course, as E! explained that she chose to keep her pregnancy secret for a while.)

Whatever her reason was for selecting such a unique dress, it's obvious that it made quite the impression on spectators, and she no doubt felt so good when it finally came off.