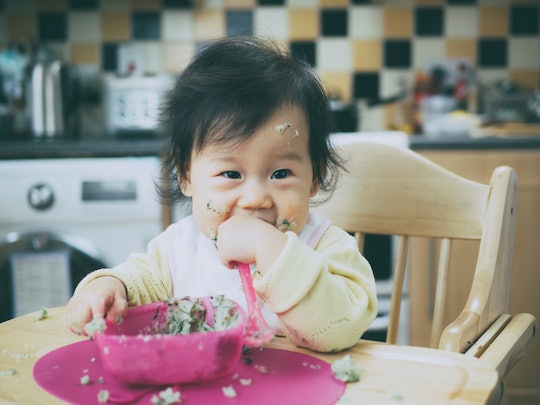 There seems to be a never-ending, forever shifting wave of opinions on the subject of introducing solids to your baby after breastfeeding. One method gaining a lot of traction lately in the field of feeding your baby is what's referred to as baby-led weaning. But what exactly is it? If you're new to this, you're likely overwhelmed with all the available information and well-meaning advice you've received. Baby-led weaning is fairly simple, but are there any mental health benefits of baby-led weaning that make it a more attractive method than the traditional ways of doing it?

Baby-Led Weaning is both a method and a book written and developed by UK midwife Gill Rapley and Tracey Murkett that turns traditional feeding on its head. The authors suggest you forego spoon feeding and rigorous schedules to instead allow your child to feed themselves from the foods you've made for your family. It avoids pureés in favor of small, bite sized, and mushy bits of food. They also encourage group meal times, togetherness, and allowing your child the exploration of foods that spoon feeding eschews. The creators believe that the mental health benefits of baby-led weaning range from healthier attitudes towards food to increased bodily and mental awareness around feeding, satiety, and the general cues your child's body and brain are sending them.

Rapley quotes a specialist public health nurse about the mental health benefits of baby-led weaning who said, "Mealtimes are about social interaction as well as eating, and baby-led weaning promotes that from the beginning." This is because the idea is to involve your baby at regular meal times instead of a time apart from their family. It encourages family meals, as opposed to solitary feeding rituals.

The mental health benefits of family meals is well-documented. Linda Pagani, PhD, in an interview with Medical News Today, discussed her study of the developmental benefits of family meals beginning from 5 months of age on. "From a population-health perspective, our findings suggest that family meals have long-term influences on children's biopsychosocial well-being," she said. It not only gives children a feeling of connection to their families, but also an intuition surrounding meal times and food that spills into adolescence and adulthood.

According to Rapley, because you're not spoon feeding your baby, they're able to assert their will and explore their personalities better with baby-led weaning. She wrote that they "become more self-reliant and independent and your child will be happiest where he can succeed on his own and have a sense of achievement."

However, the research isn't without its skeptics. For one thing, the study sized used in the book was quite small, and continually mentions cue response, which many parents are looking for when they're spoon feeding as well. They use these clues as a big part of the argument for why baby-led weaning is superior to parent-led weaning or spoon feeding. For her part, Katja Rowell, M.D, a family physician, wrote on her website The Feeding Doctor that, "You can use a spoon and pureés and follow a child’s cues with pace, quantity, and which foods. Is it easier to get pushy with a spoon versus baby-led weaning? Yes, but it is not a given."

And skipping pureés might not always make sense developmentally. According to Melanie Potock, MA, CCC-SLP, there are benefits to starting with the spoon. She said on the American Speech-Language-Hearing Association (ASHA) blog, "It’s a developmental process and both pureés and finger feeding facilitate the progression of skills. It makes sense to me to transition gradually from thinner liquids (breast milk/formula) to thicker (thus, a smooth pureé) to consistently mashed or chopped while introducing soft meltables over time."

While it is likely there are mental health benefits to baby-led weaning, it may have more to do with the connection of the family and baby at meal times than it does the method of eating. Talk to your pediatrician and decide what works best for your child.

More Like This
Does The FDA's Plan To Limit Lead In Baby Food Go Far Enough?
14 Recipes For Sick Kids When Everyone's Tired Of Canned Soup & Crackers
Covid Vaccine “Deserts” For Kids Under 5 Make It Almost Impossible For Parents To Find Shots
What Foods Fight Nausea During Pregnancy?
What Parents Are Talking About — Delivered Straight To Your Inbox