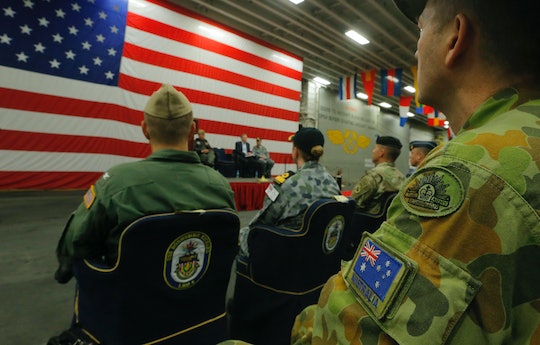 On Wednesday morning, President Donald Trump tweeted that after consulting with "Generals and military experts," transgender people would no longer be allowed to serve in the United States military. The move is catastrophic to the rights of transgender people, who already face daily violence and threats to their wellbeing. But, in addition to that, it is an insult to the thousands of trans individuals who currently serve in the military. The U.S. military's response to the president's ban has not yet come, but the statement will be critical for the futures of trans people in the military and for the rights of transgender people, generally throughout the country.

In June, Trump's defense secretary, retired Gen. James Mattis, decided to delay the Obama administration's plan to accept trans people by six months,; Mattis made this decision at the same time that the military was supposed to make changes to medical services for trans people, according to The Washington Post. At the time, Mattis said that he wanted to delay in order to better evaluate the effect that accepting trans people would have on the military, according to the Post:

Since becoming the Secretary of Defense, I have emphasized that the Department of Defense must measure each policy decision against one critical standard: will the decision affect the readiness and lethality of the force? Put another way, how will the decision affect the ability of America’s military to defend the nation? It is against this standard that I provide the following guidance on the way forward in accessing transgender individuals into the military Services.

And, in Trump's tweets about his decision to reinstate the ban on trans people in the military, he used this logic about trans people's medical costs and decisions being too cumbersome for the military:

The issue with both Trump's and Mattis' logic is that it's misguided and incredibly transphobic. Treating trans people as though their medical needs are exorbitant, burdensome, or unnecessary fails to recognize that those needs are just that: needs. They are not just wants and they are not negotiable, and their physical and mental wellbeing depends on that care. Additionally though, Mattis and Trump are just wrong. A 2016 Rand Corp. study commissioned by the Department of Defense found that the impact of transgender people's health care costs on the defense budget would be "minimal," because trans people make up so few of the military's members, according to CNN. Here's a graph that drives home that point:

The problem with all of this is that it appears Mattis and Trump don't care, and Mattis is literally the head of the U.S. military, which means his statement will effectively act as the military's statement on this ban. That's incredibly troubling, because 20 percent of transgender people in the U.S. have served in the military. This means that trans people are joining the military at twice the rate as the rest of Americans, according to LGBTQ organization The Task Force.

This means that all of those trans people who have served, all those who are currently serving (which is about 6,000, according to the Los Angeles Times), and all of those who might have served, are having that service undermined in the first case, might be forced out of their jobs if they are serving, and might not be able to use the military as an avenue for employment.

Considering how much violence and unemployment trans people in the U.S. already face, this new missive is discriminatory, misguided, and will have dangerous ripple effects for trans people across the country.