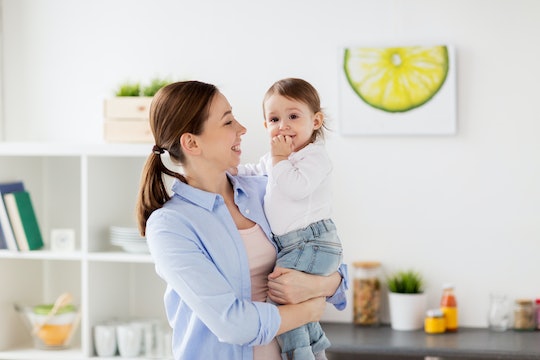 The Minimum Wage Is Going Up In 2018, & Here’s How It Could Affect Parents

A lot of families have something to celebrate this New Year's. The minimum wage is going up in 2018 in 18 states and 20 localities in the United States, and that could have a big impact on parents and families around the country. Starting Jan. 1, millions of people will see at least a little more money in their paycheck, and studies have shown that it will have a big impact on spending in households across the U.S.

The states that are set to raise the minimum wage come New Year's Day are Alaska, Arizona, California, Colorado, Florida, Hawaii, Maine, Michigan, Minnesota, Missouri, Montana, New Jersey, New York, Ohio, Rhode Island, South Dakota, Vermont, and Washington, NPR reported. As a result, an estimated 4.5 million workers will see their pay go up, and a lot of those workers may be parents.

Employers in those 18 states will have to distribute more than $5 billion in additional pay to millions of workers come January, according to U.S. News & World Report. In Maine, the minimum pay will rise from $9 per hour to $10, the largest increase of any state in the new year, according to the Economic Policy Institute.

Some of those wage changes are the result of legislation, according to U.S. News & World Report. But whatever the reason for the change in each state or locality, it could mean big things for parents looking to provide for their families, because when the minimum wage goes up, so does household spending.

If the federal minimum wage was raised from $7.25 to $9 per hour, 30 million Americans would see a wage increase, and annual household spending would increase by $48 billion, the Center for American Progress reported. Plus, an estimated 23.3 percent of all U.S. kids would see at least one of their parents get a raise if the federal minimum wage went up to that amount.

The minimum wage hasn't gone up that much across the board, but the changes are still likely to affect millions of parents and families since more than 4 million workers are set to get a pay increase in the new year. In some places, wages are going up even more than what the Center for American Progress suggested could drastically impact pay and spending. For instance, in California, 11 local governments are increasing the minimum wage to $13 an hour, and a few to as much as $15 an hour, according to NPR.

There's a bit of a myth that persists that claims that minimum wage workers are majority teenagers and other young workers who don't need more money to support a family. But many of these workers are parents, and specifically, a good number are single parents. Twenty-nine percent of low-wage workers were single parents, according to analysis reported by MSNBC in 2014. And a 2015 report found that two parents and two kids can't afford to live on a minimum wage salary in this country, according to NBC News.

The fact is, a whole lot of people will see more money in their wallet thanks to these minimum wage increases. They will likely then put the money back into the economy, according to Damon Silvers, a policy director for the AFL-CIO, a union organization. Silvers told NPR:

It puts money in motion. We've seen the distribution of income and wealth skew very much to the top of the income scale. The fact is that rich people don't spend money the way that middle-class and poor people do, and that makes our economy weak. Raising the minimum wage puts more money in the hands of people who need to spend it.

So parents in those states and localities, congratulations on your new paycheck, and happy new year. You deserve it.