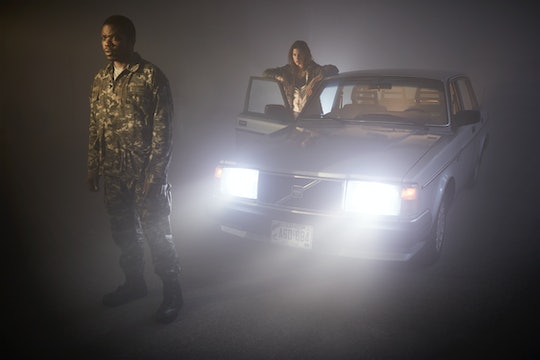 'The Mist' TV Show Will Be Very Different From The Book

Spike TV's The Mist is the most recent adaptation of the Stephen King novella of the same name. The novella was published in a horror anthology back in 1980 and has since been turned into a feature film, which premiered in 2007. The film, directed by Frank Darabont and starring Thomas Jane, stayed fairly faithful to the source material, though the altered ending gave it an even harder punch. Now The Mist TV show vs. the book shows that the series will be taking a different approach.

The novella concerns a strange, dense mist that envelops a small New England town and traps a group of its residents inside a local supermarket. They quickly discover the mist contains mysterious, vicious creatures that kill anyone who tries to escape. Things break down within the group as their confinement goes on, resulting in violence. It appears that the Spike series will play with similar themes, but otherwise depart from the novel.

Though the mist remains the inciting event that changes everything in town, the TV show introduces an entirely new cast of characters with their own dark secrets and prejudices, which are exacerbated by the new circumstances they find themselves living under. "It's a weird cousin to the original material," series creator Christian Torpe told Entertainment Weekly. "It has a constant ebb and flow communication with the novella. But who knows? Maybe some of the original characters will make a cameo at some point."

In addition to an all new cast of characters, the Spike series will be playing around with the setting. Instead of grounding all the action in one place, The Mist will be spread over a few key locations: a mall, a church, and several smaller hold-outs where the titular mist has held the residents hostage. The show will seek to explore how issues of misogyny, homophobia, and racism have been brewing in the town all along, but the addition of the mist brings everything to the surface.

Most of the changes were introduced with the intention of adapting a relatively short novel as a potentially long-running series, but Torpe also felt able to change things because a more faithful adaptation already existed in the form of the Darabont film. According to Torpe, he wanted to be respectful to the source material, but he also had to take into account the challenges of adapting to television. "The novella is two hundred pages and one location, and we needed to change that to make an ongoing series," he told Entertainment Weekly in the same interview. "But we wanted to remain faithful to the heart of the story."

Hopefully fans of King's original novel as well as totally new viewers will both be able to find something to enjoy in The Mist, which premieres June 22 on Spike.