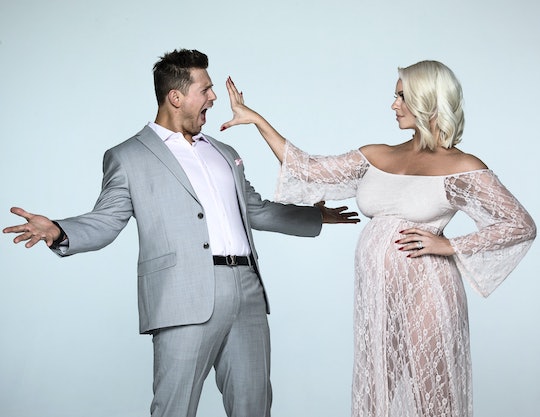 What do you do when you're stuck on a tour bus with a new baby and you forget the Diaper Genie? Mike "The Miz" Mizanin has a solution: stick the dirty diapers in the freezer. "Guess what, it stopped the smell," he tells Romper in a phone interview as Maryse groans in the background. Married WWE superstars, Miz and Maryse, are discussing their new show, Miz & Mrs which premieres on USA on July 24. The docuseries follows the couple during what they describe as the most hectic period in their lives — and they are not holding anything back.

Miz and Maryse are hardly strangers to reality TV. Maryse is possibly best known as part of the cast of Total Divas, while her husband Mike has been on nine different reality shows throughout the course of his career. But they both agree that Miz & Mrs is different from the kinds of shows they've done in the past. For one thing, they're parents now. Total Divas fans will probably remember the episode in which Maryse drops the positive pregnancy test on the counter in front of her husband saying, "Congratulations, dad." But that is just the beginning of the story.

"I was pregnant and filming up to five days before I gave birth," Maryse says, adding that they picked filming up just four days later. And shortly after that the couple moved across the country from LA to Austen, Texas, all the while with cameras in tow. The half-hour series will take viewers through all the ups, downs, and hilarity of the couple's life. But while the addition of their daughter, Monroe, obviously makes the biggest change from the shows they've been a part of before, she is not the only difference.

Mike is very clear that this show is not about drama. He doesn't want anyone to sit around and wonder if the drama of the storyline has been manufactured in anyway. Instead, he wants the show to evoke the same sort of feeling as a sitcom. "We want you to just watch it and enjoy," he says. "Enjoy the story. Enjoy the characters." Indeed, there is a definite quality to the couple's hijinks and miscommunications that is more than a little reminiscent of classic sitcoms like I Love Lucy — in which Maryse is the Ricky to Mike's over-the-top Lucy.

Take, for example, the photoshoot incident. A trailer for the show teases Mike showing up to the maternity photoshoot with the understanding that it was to be a nude photoshoot. So he is, naturally, fully nude. "It’s supposed to be 'implied nude,'" Maryse says while Mike exclaims, "I still don’t know what 'implied nude' means!" But for all the silliness and humor that abounds, the couple both agree that their favorite moment of the show was the birth of their daughter, and being able to share her with the world.

One thing is for sure though — Mike and Maryse are not keeping any secrets when it comes to sharing their lives with the world. "The stuff you usually don’t want on TV is the stuff that people wanna see," Mike observes. "Our goal was to make this real and to make you see what our life is really like." Clearly, there is never a dull moment at the Mizanin house so you had better believe that I will be there for every moment of the madness. Miz & Mrs premieres on Tuesday July 24 at 10 p.m. ET on USA.