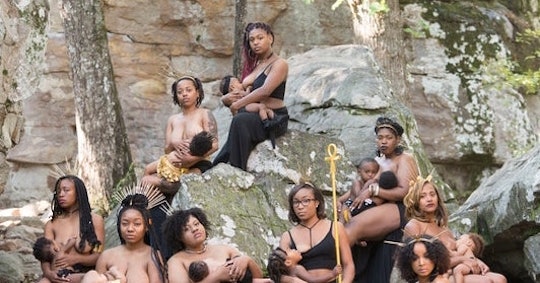 While breastfeeding has been found to be mutually beneficial to both mother and baby, some moms still aren't getting the support they need because society continues to stigmatize it. And, as statistics have shown, this lack of support can impact certain races more than others. Fortunately, though, there are many out there who want to change that. Case in point: the mothers and photographer behind this stunning photo shoot want black mothers to feel empowered while breastfeeding their babies — whenever and wherever they need to.

A group of African American moms in Alabama — known as the Chocolate Milk Mommies of Birmingham — came together for the second time to empower other black mothers to breastfeed their children and to feel legitimized in it. Speaking to Romper, the photographer of the now-viral photo shoot, Lakisha Cohill, explained that "the mood during the shoot was definitely empowering!"

And not only are the photos of the women beautiful, but the details in the shots also make an important statement. As can be seen, every mom in the photo breastfeeding her baby is also wearing a crown. According to one of the mothers, 26-year-old Charity Moore, who spoke to Yahoo! News, the group "used crowns to remind each other that we are queens and to keep one another lifted."

The moms' first photo shoot was inspired by their desire to participate in Black Breastfeeding Week, which took place from Aug. 25-31. And now, they're back at it again, and looking both fierce and powerful.

Angel Warren is the mother who actually got the group of women together. Speaking to Romper via email, she explained what inspired her to seek community. Warren kept seeing posts from black women about the negativity they receive when they breastfeed from "their spouse, family, and even complete strangers." Warren went on to tell Romper that comments like "black women don't breastfeed" or "you're trying to be white," really get to her. But "the icing on the cake" is when someone says that women who nurse uncovered "are looking for attention and that we are getting sexual gratification from it."

Because of this, Warren decided that a group of strong, black mothers was exactly what was needed to crush these stigmas. She "specifically asked for black moms because the stigma behind [the] community" is troubling and can have a lasting impact.

And, unfortunately, she's right about that. According to the Centers for Disease Control and Prevention, black infants "consistently had the lowest rates of breastfeeding initiation and duration across all study years and "black mothers may need more, targeted support to start and continue breastfeeding." So, truly, the importance of this photo shoot and the message these mothers are sending to others cannot be overstated.

What's more, the impact of this group of women has already been pretty amazing. Cohill told Romper in an email that, despite their differences, the women completely welcomed her. "These women are absolutely amazing, and have formed a sisterhood, and bond that's unbreakable, they even accepted me into their circle although I'm not currently nursing," she said. "Being a part of this movement has been life changing."

Cohill added that she didn't breastfeed "due to lack of knowledge" and "support." But, through the women behind this group, they convinced her "why it's so important to nurse your children naturally" and "have created a community specifically to give knowledge, and support to mom's [sic] who breastfeed," she told Romper.

Of course, it's sometimes more complex as some women are physically unable to breastfeed and their stories matter, too. According to Parenting.com, "about 2 percent of all women can't produce enough milk, regardless of their physical or emotional condition. Others may lactate poorly because they're exhausted, anxious, or depressed, or weakened by postpartum surgery."

However, some women don't breastfeed because of a lack of education and support. Specifically, as the National Center for Biotechnology Information reported, a large number of women "lack knowledge about its specific benefits and are unable to cite the risks associated with not breastfeeding."

Enter: the Chocolate Milk Mommies of Birmingham. The group is inclusive, empowering, and they have an important message. Every woman should be able to decide for themselves how they want to do motherhood. And for Cohill, that means recognizing her own power, as she told Romper:

The chapter I would say I'm currently in now is taking my power back, and realizing that although I am a woman of color, and despite all odds that I do have a voice, and ultimately I control my own destiny.

She told Romper that these photos, and this group of women, represent a change that has been coming for years. "For as long as I can remember women (particular women of color) have been given a script on what they should or shouldn't be doing, so we decided to drop the original script, and create our stories based off who we are not who we're told to be," she said.

At the end of the day, breastfeeding is beautiful and powerful, and most of all, it is normal, which is something Moore wants women to know. "Breastfeeding is a mother's choice. It's not dirty, nor shameful and should only be done in a way that reflects mommy and baby's comfort levels," Moore shared with Romper.

She added, "For some moms, breastfeeding looks like this. For others, they may choose to cover themselves. And some moms may choose not to breastfeed at all. All of which are perfectly ok."