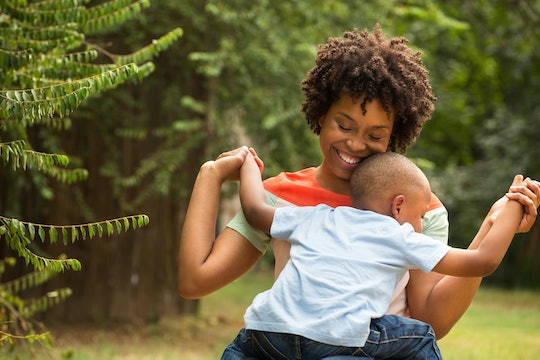 Study: The More You Communicate With Your Kid When They're Young, The Healthier They'll Be

The new study — which was published in Biological Psychiatry and led by Christopher Holmes, Ph.D., and colleagues from the University of Georgia's Center for Family Research — followed participants from the age of 11 to 25, according to Medical Xpress. Holmes and his team focused on rural African Americans because they are an understudied population that may be disproportionately at risk for these harmful health behaviors.

When the participants were 11 to 13, they shared interactions with their parents, including the frequency of discussions and arguing. And the results of the 14-year research ultimately suggested that greater communication between parents and their children actually promotes the development of a brain network that processes rewards and other stimuli. These stimuli, in turn, protect children against abuse of food, alcohol, and drugs later in life, according to EurekAlert.

When the participants were 25 years old, 91 of them were recruited from the larger study, and they underwent a neuroimaging session (like an MRI, in layman's terms) to measure brain activity. The researchers were specifically watching a a network of brain connections called the anterior salience network (ASN). The participants also were tasked with answering questions about harmful alcohol use and emotional eating, and, as it turns out, who communicated more with their parents in early adolescence had greater connectivity of the ASN at age 25. And greater ASN connectivity was, in turn, associated with lower alcohol abuse and disordered eating at age 25, EurekAlert reported.

These findings could potentially help combat the increasing drug use issue in the country. In 2013, an estimated 24.6 million Americans aged 12 or older (or 9.4 percent of the population) had used an illicit drug in the past month, which is up from 8.3 percent in 2002, according to the National Institute of Drug Abuse. Drug use is highest among people in their late teens and 20s, too; in 2013, 22.6 percent of 18- to 20-year-olds reported using an illicit drug in the past month. Most recently, the country is combatting an ongoing opioid epidemic, according to Healthcare IT News.

As for emotional or disordered eating, 38 percent of adults have said they have overeaten or eaten unhealthy foods in the past month because of stress, and just about half of these adults (49 percent) have reported engaging in these behaviors weekly or more, according to the American Psychological Association (APA). And, teens' eating habits under stress are also poor, reports the APA, Among those who've reported overeating or eating unhealthy foods because of stress, 33 percent said they did so because it helps distract them from what was causing them stress, the American Psychological Association reported.

But the findings of the new research highlight the value of parents just talking to their kids during early childhood as a means of fostering long-term, adaptive neurocognitive development, said Allen Barton, Ph.D., corresponding author of the study, according to EurekAlert.

"[The new research] might mean that social interactions [between parents and their children] actually influence the wiring patterns of the brain in the teenage years," said Dr. John Krystal, Editor of Biological Psychiatry, according to Medical Xpress, noting that the results indicate the importance of family interactions in brain development and the emergence of "maladaptive behaviors in adulthood."

Regardless of whether it actually keeps kids from developing unhealthy behaviors later in life, communicating more with your children during early childhood certainly can't hurt.