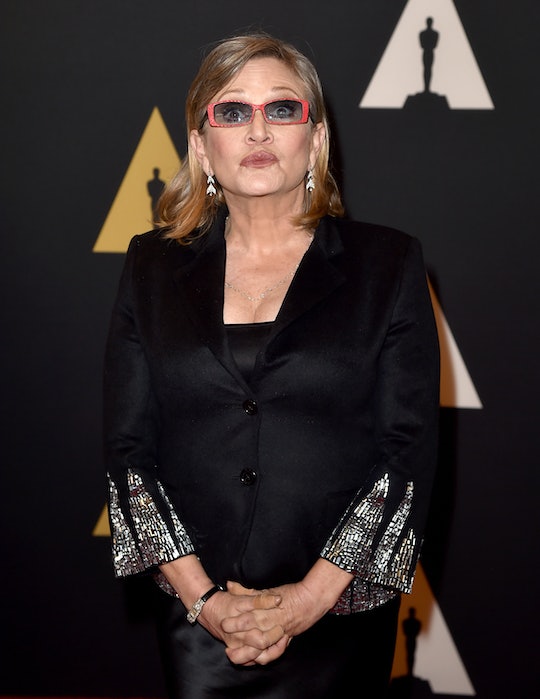 All Of Carrie Fisher's Most Feminist Quotes

Just days before many settled in to celebrate the holidays with their families and loved ones, news broke that iconic Star Wars heroine Carrie Fisher suffered a heart attack on a plane. Though she was reportedly in "stable condition" following the emergency transport to a hospital after the flight, news broke early on Tuesday, December 27 that Carrie Fisher died. As the world mourns the loss of yet another legend, Carrie Fisher's most feminist quotes lay the foundation of not only the legacy she leaves behind in the film community, but also the impression she has made in the hearts, minds, and futures of feminists the world over.

In a statement given to PEOPLE, news of Fisher's death at 60 was confirmed. The statement, given by Simon Hall, a spokesperson for the Fisher family, read:

It is with a very deep sadness that Billie Lourd confirms that her beloved mother Carrie Fisher passed away at 8:55 this morning.

Fisher was the daughter of Debbie Reynolds and Eddie Fisher. Fisher's most iconic and trailblazing role was that of Princess Leia. As she grew up in the Hollywood bubble, Fisher was vocal about her struggles with mental health and cocaine. But through every high and low, she maintained an awareness and a simple humor when it came to her beginnings. According to US Weekly, Fisher famously joked:

But beyond her brilliant sense of humor, Fisher was an outspoken advocate — both through her film roles, her lasting portrayal of Princess Leia, and her speaking and written work — for feminism. The world might have lost another great actress to the shameful garbage fire that 2016 has turned itself into, but the feminist community has also lost an incredible advocate.

On Being Exactly The Person She Was

In a 1983 interview with Rolling Stone on her role as Princess Leia, Fisher talked at length about what it's like to play a character on the big screen that most people might not believe to be real. When she was asked if she believed if fairy tales could happen to her, Fisher said:

And once it was proposed to me that it was all right to be like I am, I finally quit apologizing for it.

On Where Her Strength Came From

In that same Rolling Stone interview in '83, Fisher was candid about developing a personal, inner strength. She shared:

Strength is a style.

On Struggling With Mental Health

In her book Wishful Drinking, Fisher pointed out that “living with manic depression takes a tremendous amount of balls." She also added that doing so is "something to be proud of, not ashamed of."

Debbie remains the girl-next-door, whereas I live somewhere down the street.

On Seeing People For Who They Are And Accepting That

Fisher was also candid about her relationship with her father, Eddie Reynolds, who famously left her mother for Elizabeth Taylor. In her book, Shockaholic, Fisher wrote:

I loved my father. The man was beyond fun to hang out with, appreciative, playful and eccentrically sweet. But this was also a man who – though he genuinely meant to give bona fide diamonds of only the finest colour, cut, and clarity – ultimately was only able to offer cubic zirconium."

On The Constant Pressure To Be "On"

Also noted in an excerpt from Shockaholic published by The Daily Mail, Fisher talked about the pressure to be "on" in Hollywood — and to look a certain way at all times.

What I didn’t realise – back when I was this 25-year-old pin-up for geeks – was that I had signed an invisible contract to stay looking the same way for the next 30 to 40 years. Well, clearly I’ve broken that contract.

On Comments That She Hadn't Aged "Well"

After critics complained that Fisher hadn't aged well, Fisher fired back beautifully, illuminating that talent is comprised of more than just beauty and youth:

Fisher's lasting memory will continue on in the hearts and minds of those who loved her. And her words serve as a commitment to the work, power, and (of course) force of her being.