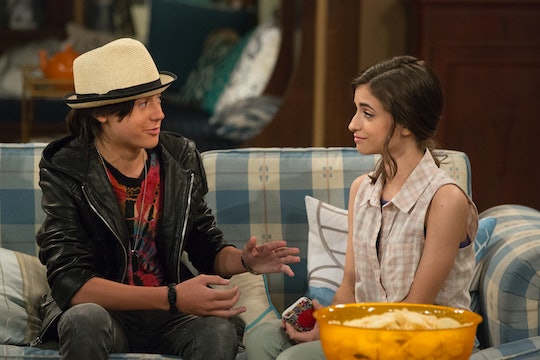 (Warning: This post contains spoilers from Fuller House Season 2.) As a story about a single mom raising three boys and her independent sister and best friend helping her out, you might think that the most feminist moment of Fuller House would come from one of them. But as it turns out, the most feminist moment in Fuller House Season 2 came from Kimmy Gibler's daughter, Ramona. She may be only 13 years old, but she already knows how to handle herself when it comes to relationships. I can only say I wish I was that wise at her age.

Ramona has her first kiss with an unlikely fedora wearing boy named Popko. Personally, I have a hard time trusting a man in a fedora, and my instincts were right — at least at first. It all started after he kissed Ramona and then proceeded to go to the movies with another girl, leaving poor Ramona heartbroken. When he and the other girl broke up, of course, he tried to get back with Ramona, but she was not having it. He went to the movies with another girl, and so no, she would not like to be his girlfriend now that they're broken up, thank you very much. This was the moment I literally said to my TV, "Yass queen!"

Because he is a boy in a fedora, Popko then went on to get his revenge on Ramona by posting a mean video of her online, which went viral in their school. And then the silly boy had the gall to ask her out for a third time a few episodes later. To any woman who has ever dated or rejected a man, it was all too familiar, and all too depressing that it really does start this young. You would think that men would grow up after middle school and stop alternately trying to humiliate the woman they like and then ask her out again. But they don't.

Even after Popko apologized, realizing he'd messed up, and started showering her with scented candles and Toblerone, Ramona remained pretty firm in her decision, and the boy had to learn to deal with rejection. Ramona didn't waver, didn't take pity, and didn't feel obligated to go out with a boy who was mean to her just because he decided to be nice after the fact. Ramona is a teen hero and young girls watching should follow her lead.

In the end, Popko seemed to realize that she was not interested, and tried to respect that. On New Year's Eve, though, he'd been planning to try to kiss her all night. But in the end, he doesn't make the attempt. "You're not going to try to kiss me?" she asked, rightfully dubious. He responded that no, he's just happy to hang out with her. And that's when she finally did kiss him, but on her terms. Lessons were learned, and Ramona didn't let herself get stomped on a second time. You go, girlfriend.