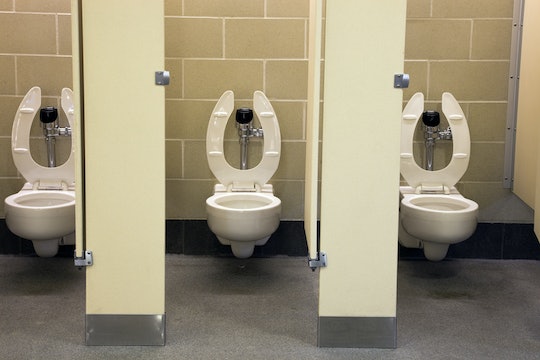 The Most Hygienic Way To Use A Public Restroom

Have you ever met someone who flat out refuses to use public restrooms? Though I admire their tenacity (and bladder control), the fact remains, I'm never going to be one of those people. I have a bladder the size of a dime, and it always wins out, no matter how sketchy the public restroom may look. Luckily, there are strategies on the most hygienic way to use a public restroom. Yes, researchers have actually studied the best and cleanest way to use public restrooms. So whether you're well-practiced at the art of hovering, or a toilet seat cover is more your style, pay attention, because this public restroom hygiene will behoove you.

"One of the cleanest spots is usually the toilet seat," Chuck Gerba, professor of microbiology and environmental sciences at the University of Arizona told Greatist. "A lot of people will wipe it all day, and [cleaners] tend to use disinfectants on it." So if you can't hover, or you're out of toilet seat covers, don't fret. According to Gerba, the real threat of germs lies in the area surrounding the toilet, and not the toilet itself. Because public toilets have eliminated toilet lids, it makes it impossible to guard the surrounding area from the spray of droplets that tend to escape when you flush. Gerba told Greatist that those droplets can carry bacteria from a number of fecal-borne diseases, like E. coli, norovirus, salmonella, or shigella. So when you're in the stall, do your best to keep your hands to yourself, as things like support rails, toilet paper dispensers, and the walls, contain an epic amount of bacteria.

According to a segment aired on The Doctors, investigators found that the toilet closest to the bathroom door had the lowest amount of bacteria, probably because most people tend to head toward the stalls that are further back. So if this stall is available, take it. And if you're still not convinced about foregoing the toilet seat cover, at least take this into consideration: if you're out of toilet seat covers, don't use toilet paper in lieu of a cover. Not only is it practically useless because of toilet paper's porous nature, Raymond Martin, the managing director of the British Toilet Association, told BuzzFeed “placing toilet paper on the seat actually increases the surface area for germs to multiply and therefore is considerably less hygienic”.

Jason Tetro, microbiologist and author of The Germ Code, told Women's Health that women should flush the toilet with a foot. "Those aerosols will travel about six feet, and how far is the handle from the bowl," Tetro explained. Since it’s right there, you may want to avoid touching it. By all means, use your foot.” He also recommended holding your breath while you flush if you're horrified by the thought of the inevitable backsplash flushing a toilet provides.

Although most people are more concerned with what happens inside the stall than out, the truth is, the sink and surrounding area can actually be the most germ-filled places of all. Because you go straight for the handles after you've just been at the toilet, the handles are prime breeding ground for bacteria. But this doesn't mean you should skip washing your hands. Washing your hands thoroughly is the best way to prevent the transmittance of all of those possible germs to you for the rest of the day. However, there is a strategy for the best way to wash your hands. The Doctors recommended grabbing a paper towel before you wash your hands. For your best defense against sink-germs, use the towel to turn the tap on, wash your hands, and use the towel to turn the tap off and grab the door because tossing it in the trash. With these strategies, you can turn your public restroom experience into the cleanest experience possible.