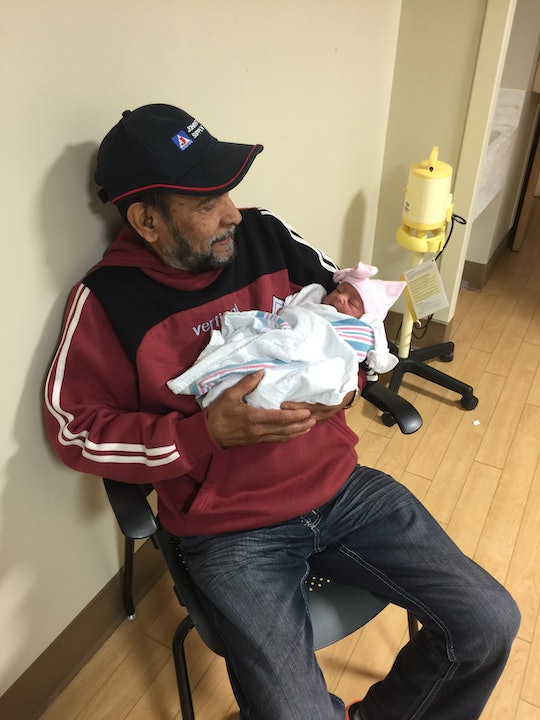 Dear Dad: Thanks For Giving Me The Best Parenting Advice

Before I had a baby, I thought that motherhood would just come naturally to me. When I spoke to other moms, they made it seem this way too. They kept reassuring me that my instincts would kick in and I'd find my footing in a few months.

But after I had my daughter, that wasn't the case at all. I tried to do it all on my own: the cleaning, the chores, the feedings. But I soon realized that I couldn't. To make matters worse, I had a c-section, which meant that something as simple as rocking my baby to sleep or even picking her up was incredibly painful.

At first, I depended on my husband quite a bit. But when he went back to work, I was lost. I felt like I was drowning in a sea of diapers and bottles. I wanted to ask my dad to ask for advice, but I felt like I couldn't. Little did I know that he would offer me the wisdom that helped me survive during my first year of motherhood.

In many cases, a new mom can depend on the other women in her family, like a mom or sister, to help out. But unfortunately, that wasn't the case for me. It's just me and my dad, because my mom has been in and out of my life for years. Although I knew my dad was great with kids, I didn't think I could depend on him or even ask him for help. I just assumed that as a grandfather, he would want to enjoy all of the fun moments with my baby, not the crying and the sleepless nights and the spitting up. .

For some reason, I felt like only another woman could give me the help I needed, or relate to what I was going through. But when I tried to reach out to other moms and tell them what I was going through, it seemed to make them uncomfortable. When I complained about being too tired, being in pain, or not feeling quite like myself, they would say things like, "Welcome to motherhood," or, "Yes, that's what being a mom is." It was as if they were ashamed to admit that they didn't enjoy every single moment of motherhood, or that they didn't have it all together. They clearly felt like if they confessed to having felt anything but joy about being a parent, it was like admitting to failure.

No one in my life was supportive — except for my dad.

I felt like I had no right to complain about my situation, and that I was just supposed to suck it up and get through the newborn phase myself. I was anxious, depressed, and sad. I didn't feel supported. Instead, I felt judged.

Our culture tends to think motherhood is an easy adjustment for most women, so we feel ashamed of ourselves when it's not. Though there were some women who were honest about the difficulties of motherhood and were able to commiserate with me, they were usually strangers or anonymous posters on mommy blogs. No one in my life was supportive — except for my dad.

It must have been totally obvious that I needed help, because one day, my dad stepped in without me asking. He was understanding and sympathetic. He told me that what I was feeling was normal, and that becoming a parent was the most difficult thing he ever did. He told me about all of the nights he had to rock me for hours so I would fall asleep, and he said I went through a phase where I always had to be held or I would scream for hours on end. He also talked about the anxiety he felt every time I got sick and had to be rushed to the doctor. Most important, he told me that he too hated the newborn phase, which is exactly what I needed to hear.

The newborn phase was awful for me. It was scary, tiring, and lonely. Hearing that my dad felt the same way made me feel like I wasn't a bad mom.

Most parents don't want to admit that they didn't enjoy the first few months of parenthood, because they don't want their children to feel like they were unwanted. But the newborn phase was awful for me. It was scary, tiring, and lonely. Hearing that my dad felt the same way made me feel like I wasn't a bad mom.

Most parents can't wait for their children to have kids of their own, so they can say "I told you so," and prove just how difficult being a parent really is. To a degree, I expected my dad to do the same. But instead, he offered his help and told me I was being too hard on myself.

Many moms feel like we are being judged if we don't relish every single moment of motherhood. That's perhaps why, when I said that I was struggling with parenthood, many fellow moms dismissed me or sugar-coated what they had gone through when they were new parents. But hearing those kinds of things didn't help. What helped was my dad's honesty. And ultimately, no one in my life got me through the early days of parenthood the way he did. I am so grateful to him for that.