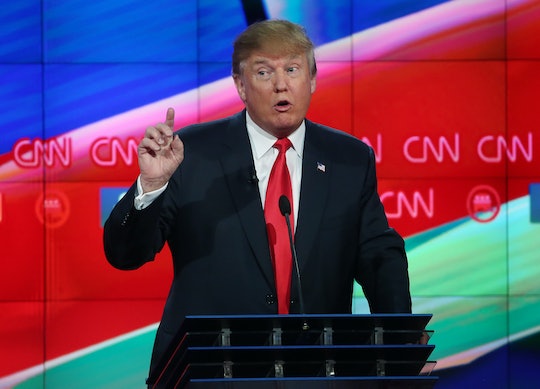 It's that time again. The GOP held court tonight in The Venetian in Las Vegas, Nevada, and those debating Republicans certainly make for some interesting entertainment, especially when you've got The Donald mouthing off on everything from foreign policy to the supposed ban on Muslims. Needless to say, there wasn't a shortage of outrageous Donald Trump quotes at the CNN GOP debate, which aired Tuesday, Dec. 15. Because this debate was slated to focus on foreign policy, pundits speculated that Trump was really going to let it rip, and they were right.

In recent weeks, Trump has, unfortunately, been incredibly outspoken about the path he'll take us down as president of the United States. He's proposed a ban on Muslims wanting to enter the United States, calling for a "total and complete shutdown of Muslims entering the United States until our country's representatives can figure out what is going on." He then defended his comments on to CNN's Jake Tapper, saying, "I have many friends that are Muslims, and I will tell you, they are so happy that I did this because they know they have a problem."

When pressed, he said that many of his Muslim friends feel he is doing them a "favor," saying:

Oh, Donald. Though he entered the debate with high hopes that the network and Wolf Blizter would "treat him fairly," (which is hilarious, given that "fairly" is a courtesy he rarely extends to anyone else), Trump fired back — and hard tonight.

Here are Trump's most outrageous quotes from the GOP debate, proving, yet again, that no one can trump Trump when it comes personal offense and inaccuracy.

His Comments On His Wall:

I will build a wall, it will be a great wall.

I do want a wall. Walls work.

So they can kill us, but we can't kill them?

Whether Or Not He'd Kill ISIS' Family Members:

I will be very, very firm on families, and frankly, that'll make people think, because they may not care much about their lives, but they do care about their families' lives.

His Comments On Muslims:

If Obama has brought some to this country, they're not going; they're leaving; they're gone.

Jeb doesn't really believe I'm unhinged. He said that very simply because he's failed in this campaign. It's been a terrible disaster. Nobody cares. And frankly, I'm the most solid person up here.

I know you're trying to build up your energy, Jeb, but it's not working.

I wish it was always as easy as you, Jeb. You're a tough guy, Jeb. I know. You're real tough.

On What's Working In America

Nothing works in our country.

Never one to disappoint, I'm wondering if next time around it might be more shocking to record the nice things The Donald says?