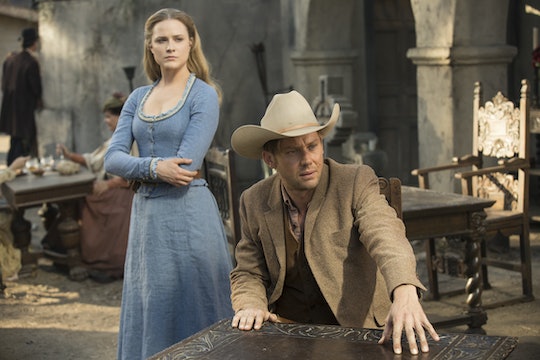 Just a few episodes in, Westworld has already become one of those shows that invites a lot of hardcore theorizing. Reddit, the headquarters of all such fan theorizing, has come up with dozens upon dozens of theories about the show, hypothesizing on characters' true motivations, their histories, even their very humanity. The most outrageous Westworld theories on Reddit cover pretty much every tiny detail of the show, moving from the plausible to the downright insane.

Fandom and theorizing can be one of the most entertaining aspects of watching a great show, especially when that show is not on Netflix and is therefore not binge-able. Westworld offers its audience just enough in terms of tangible details that it leaves us inescapably hooked, while leaving so much out that we're all desperate for more information. Each new revelation seems to just lead to more questions. We find out that Dr. Ford is building an agave farm, but now we want to know why, and how. We find out that the Man in Black is looking for a "maze," but now we want to know for what purpose? Where is the maze? What does it lead to? Never fear, our trusty Redditor television spies have come up with possible answers for every question.

Westworld Takes Place On Another Planet

Coming to us via Redditor Zmxm, one theory is that the DELOS complex is nowhere on Earth, but is actually on a different planet. (This is the future, after all.) This Reddit theory goes even further by suggesting that the managers at Westworld have the ultimate goal of colonizing these other planets with their robot hosts. At least for the first part of this theory, there are some good points. Why is communicating with loved ones at home such a struggle? And where would all that terraformed land come from?

Delores & Bernard's Conversations Are In Her Head

Redditor Turmanator89 hypothesizes that the conversations between Bernard and Dolores are not actually happening in the physical world, but are instead happening entirely within her own mind. This would explain why she always seems to have been magically transported between worlds before anyone notices that she's gone. Bernard could be tapping into her consciousness remotely.

William Is The Man In Black

This one has been kicking around for a while and has grown fairly popular. Redditors, including Where_isJessica_Hyde are predicting that William and the Man in Black are actually operating on two different timelines, and are actually one in the same. William would be the younger version of the Man in Black, back when he was innocent and good and treated Dolores like a person instead of a robot.

There Is No Arnold

Redditor Skywokker believes that there is no real Arnold at all, but that he is simply a character made up by Ford to, I guess, teach Bernard something. The theory argues that, in the flashbacks of Ford creating Westworld, there was no Arnold to be found. It's also noteworthy that in an interview with Entertainment Weekly, the show's creators said it was "highly unlikely" that we would ever actually meet Arnold. Perhaps this theory is on to something.

Everything Is As It Seems

Of course, there are still those Redditors who seem to be getting a little fed up with all the wild speculating that's happening here. "I have this theory that there's one timeline, and that the show is following a linear narrative that's meant to be interpreted at face value by the audience. Some of the theories people are coming up with are pretty absurd, and while theoretically plausible, don't make sense from a storytelling perspective. Having multiple timelines crossing over for half of the series for the sake of a 'It was me all along!' twist would be the exact kind of low-brow thrill that the story has actively mocked," Reddit user Gabblox said in a very well-crafted argument.

Who knows how many, if any, of these theories turn out to be true. We'll just have to keep watching to find out.