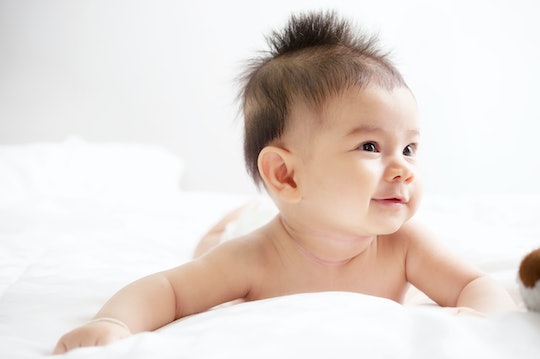 Olivia & Liam Were Among The Most Popular Baby Names Of 2019

As December winds down, it's fun to look back at some of the year's biggest and most interesting trends, which includes the most popular baby names in 2019, of course. Before 2020 is officially here, at least three outlets have released their annual reports regarding the 100 most favored monikers for little ones, giving parents, and parents-to-be, a well-rounded look at what names they'll likely see in their child's future Kindergarten class.

Interestingly, no two lists of popular 2019 baby names are exactly the same. And although a number of names can be found on all three lists, they tend to be ranked in different places on each list. For example, while Daniel is ranked as the 24th most popular name for boys in 2019 by BabyCenter, the website BabyNames ranked it 68, and Nameberry listed it in 82nd place. Still, it's clear that Daniel remains a classic, popular name.

And although there are dozens of names that are new to the lists this year, a majority of them are long-standing favorites. In fact, BabyCenter reported that Sophia has enjoyed an entire decade as the organization's number one name for girls. For boys, however, 2019 saw Liam finally edge out Jackson to become the most popular name for boys after six years in second place.

Here's how 2019's most popular baby names breaks down: