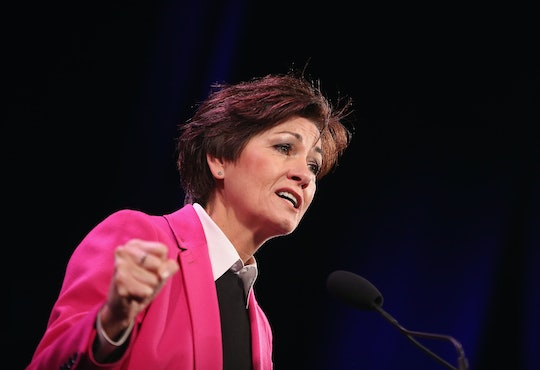 On Jan. 22, 1973, the U.S. Supreme Court affirmed the legality of a woman's right to have an abortion. This 7-2 decision in Roe v. Wade was historic, and it's what allows women across the nation to continue making very personal decisions about their families. However, as state lawmakers continue to push the limits when it comes to a woman's legal right to abortion, the restrictions keep piling up. Many states have 20-week abortion bans; other states are imposing abortion bans well into the first trimester. Still others are toying with making abortions of fetuses with Down syndrome illegal. And as of Friday, the most restrictive abortion bill was just signed into law in Iowa — and here's what you nee to know.

On Friday evening, Iowa Gov. Kim Reynolds signed a six-week abortion ban into law, CBS News reported. With protestors lined up outside the state's capitol chanting, "My body, my choice!" the Republican governor made the harshest abortion restrictions in the U.S. a reality for Iowa residents. "I understand and anticipate that this will likely be challenged in court," Reynolds said in a statement, according to CNN. "However, this is bigger than just a law. This is about life." She also added:

It is immoral to stop an innocent beating heart ... my faith leads me to protect every Iowan, no matter how small.

Let's take a look at the specifics of this new abortion ban, shall we? Deemed the "heartbeat bill," this new Iowa law will ban most abortions once a fetal heartbeat can be detected, CBS News reported. (Fun fact: According to BabyCenter, this can happen as early as six weeks gestation. You know, well before many women even suspect they're pregnant — meaning they wouldn't have the option of abortion at all after finding out. Ugh.) There are a few exemptions, however: To save a pregnant woman's life, and in the event of rape and incest — under certain circumstances. Apparently, the rape must be reported within 45 days and the incest must be reported within 140 days. Not that these things are traumatic or anything,

Fortunately, it looks like there's a pretty good chance the law will be blocked before it can officially go into effect on July 1, CNN reported. Iowa affiliates of Planned Parenthood and the American Civil Liberties Union had already threatened to sue Gov. Reynolds if she signed the heartbeat bill into law. "We will challenge this law with absolutely everything we have on behalf of our patients because Iowa will not go back," Suzanna de Baca, president and CEO of Planned Parenthood of the Heartland, said in a statement, according to CBS News.

Let's just say there are plenty of people — women and men alike — who are also royally pissed about these blatantly unconstitutional abortion restrictions in Iowa. Here's a look at some recent Twitter reactions.

For the record, a similar bill was actually passed by both the House and the Senate in Ohio a few months back — but was ultimately vetoed by Gov. Kasich, USA Today reported, in favor for a 20-week abortion ban instead. Recently, though, Ohio has been flirting with an all-out abortion ban, according to The New York Times. (Which is blatantly unconstitutional, in case you were wondering.) Similarly, Mississippi had passed a law earlier this year that banned abortions after 15 weeks gestation. But that's currently on hold after a court challenge, USA Today reported.

I'm not sure how we can so easily forget our own history. Before Roe v. Wade, abortion was illegal in the U.S. — and yet, women still found ways to get them. Unfortunately, these underground/secret routes of getting an abortion were not nearly as safe, as NPR reported. In fact, abortion was listed as the official cause of death for nearly 2,700 U.S. women back in 1930, according to the publication. This, among other reasons — like a woman's right to make medical decisions about her own freaking body, for starters — is why it's so imperative that women continue to have access to safe abortions. Or else, history is doomed to repeat itself.